The RX-79[G]Ez-8 Gundam Ez8 (ガンダムEz8) is a custom variant of the RX-79［G］ Gundam Ground Type appearing in the OVA series Mobile Suit Gundam: The 08th MS Team. It is piloted by the main protagonist Shiro Amada.

The Gundam Ez8, despite being constructed largely of spare parts, was actually capable of a slightly higher performance than the RX-79[G] Gundam Ground Type. By removing the fixed weapons in the left side of the chest, the Kojima Battalion engineers were able to utilize the extra space to improve upon its power plant mechanism and boost reactor output, granting the Gundam Ez8 a higher generator output, better propulsion, improved mobility, and superior overall performance. The Gundam Ez8's armor placement was also revised, giving it added protection around the cockpit block and chest, and around the ankles.

To compensate for the removal of the chest-based vulcan and multi-launcher cannons, the Gundam Ez8 had a 12.7mm Vulcan gun placed in the suit's abdominal region, as well as twin 35mm machine guns mounted in the head. The Ez8 still retained the two beam sabers stored in the sides of the legs, and was still capable of using all of the armaments its predecessor. The traditional Gundam "V-fin" communications array mounted on the forehead was done away with, replaced by a more durable and more function-efficient communication antenna on the right side of its head. The Gundam Ez8's backpack design was left unchanged allowing it to still mount mission packs and other necessary field equipment options.

Also known as 35mm Vulcan Gun, a pair of these weapons are mounted in the head. These shell firing weapons have a high rate of fire but little power and can't damage the thick armor of a mobile suit, though it can damage lightly armored areas such as the sensors. They are ideal for shooting down small, lightly armored targets such as missiles, small land vehicles, and attack helicopters.

Mounted in the torso, the Vulcan gun is primarily designed to take out enemy infantry. It can be used in conjunction with the head mounted 35mm machine guns to target enemy attack craft, though like the machine guns, it lacks the power to significantly damage mobile suit's armor.

The RX-79[G]Ez-8 Gundam Ez8 has two beam sabers, one stored in the side of each lower leg. The beam saber is a small device held in the mobile suit's hands when operated and is powered by a rechargeable energy capacitor. The beam saber emits a blade of plasma contained by an I-Field and is capable of cutting through almost any armor not treated with anti-beam coating.

Mounted on the forearm, this shield is a reinforced version of the one commonly used by the Gundam Ground Type and the GM Ground Type, with a small additional armor plate attached to the surface that provides additional protection against projectiles and increases overall durability. Other features remain the same.

The standard armament for Federation's mobile suit ground forces during the One Year War that was developed by Yashima Heavy Industries. It has an alternate model number: "NF·GMG-Type.37/100mm". Equipped with a box magazine and folding stock, it has excellent rate of fire and is easy to wield. It utilized a smoothbore type barrel that lacked rifling and has to be replaced after firing 3000 rounds. The weapon could utilize three different types of ammunitions: HEAT (High Explosive Anti Tank), APFSDS (Armor-Piercing Fin-Stabilized Discarding-Sabot), and HESH (High Explosive Squash Head), allowing combat units to select the appropriate type to meet operational needs. Like the Gundam Ground Type, the Gundam Ez8 carries two spare magazines on its side skirt armor.

On the back of the Ez8 is a weapon rack for carrying weapon containers, parachute packs, etc. In addition, the rack is equipped with a foldable searchlight and certain sections can unfold into a forklift-like mechanism.

Container for storing spare or additional armament that can be attached to the weapon rack. The container allows the Ez8 to carry a variety of armaments and ammunition for both itself and the other members of its squad.

As the RX-79[G] Gundam Ground Type units were constructed primarily of spare parts left over from the RX-78 development project, replacements parts for them were very limited. When the 08th MS Team's leader, Ensign Shiro Amada's, RX-79[G] Gundam Ground Type was all but destroyed during an ambush on the Zeon's prototype Apsalus II mobile armor, it had to be rebuilt using whatever parts the engineers could find.

Shiro Amada's Gundam Ez8 continued to see service in the Southeast Asian theater during the One Year War, until it was destroyed during the battle to besiege and capture Zeon's mountain stronghold where the completed Apsalus III was located. The Ez8 suffered heavy damage in its battle against Norris Packard and his MS-07B-3 Gouf Custom before being damaged beyond repair in combat against the Apsalus III, a RGM-79［G］ GM Sniper shooting its left side before having most of its body blown off when the Apsalus III misfired after the Ez8 smashed its cockpit with its fist.

A space combat variant of Gundam Ez8. First appears in SD Gundam G Generation Gather Beat video game. This non-official variant has an identical in-game visual appearance. Aside from becoming space worthy, the only difference to Gundam Ez8 is its handheld cannon which is 200mm caliber instead of the standard 180mm. In the game, the Ez8 Kai is built after Shiro Amada launches his regular Ez8 to fight the Apsalus III in space, but is unable to move, due to the fact that his unit was built for Earth combat and thus easily beaten. Doctor J, aiding the heroes, goes on to modify the Ez8 to be space-worthy and later creates two specialized modules for the Ez8 Kai. In the sequel game SD Gundam G Generation Gather Beat 2, the Ez8 Kai undergoes renovation using technology introduced during the Gryps War. Although the appearance does not change, the internal mechanism has been changed to modern standards, so the Ez8 Kai's performance does not lag behind the MS at the time. 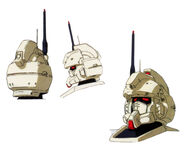 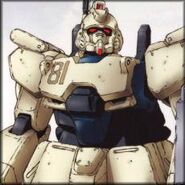 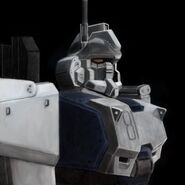 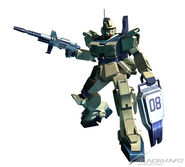 Gundam Ez8 as it appears in Gundam Vs Gundam NEXT 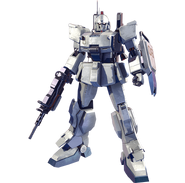 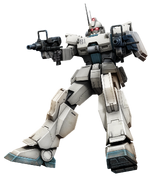 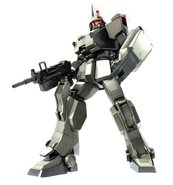 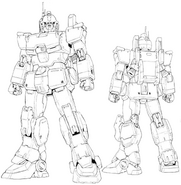 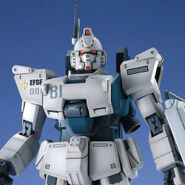 Retrieved from "https://gundam.fandom.com/wiki/RX-79%EF%BC%BBG%EF%BC%BDEz-8_Gundam_Ez8?oldid=446758"
Community content is available under CC-BY-SA unless otherwise noted.