In one of the the "What-if" scenarios of the original Gihren's Greed game, the Titans was formed much earlier and developed the RX-78T Gundam Titans Version prior to the development of the RX-178 Gundam Mk-II. Compared to the original RX-78-2 Gundam, the RX-78T Gundam Titans Version has much higher performance at the cost of shorter operating time.

The beam saber is a small device held in the mobile suit's hands when operated and is powered by a rechargeable energy capacitor. It can cut through most armor not treated with anti-beam coating. The RX-78T has two beam sabers stored in the backpack. One can be used as a reserve weapon, or both can be used simultaneously in a twin sword fashion. The beam saber can also transform into the beam javelin.

The beam javelin is an alternate form of the beam saber, with an extended handle and a three-pronged beam at the end. The long reach of the weapon gives the RX-78T an advantage in close quarters combat. It was also used as a throwing weapon.

The beam rifle is the primary weapon used by the RX-78T. Making use of E-cap (or "energy capacitor") technology, the rifle uses charged concentrations of Minovsky particles as ammunition. This gives the beam rifle firepower equivalent to that of a battleship's beam cannons. Features include a large, movable offset sensor that interfaces with the RX-78’s Fire Control System (FCS) to achieve a high degree of accuracy, and a stabilizing foregrip for firing support.

Hand-carried, forearm-mounted or stored on the backpack, the shield is a simple defense used to block most physical and beam attacks.

Similar to the prototype mobile suits produced by the Earth Federation Forces' Operation V, the RX-78T is equipped with a central block which houses the mobile suit's cockpit, control systems and main power source. This core block can eject in case of emergency and unfold into a small Core Fighter. 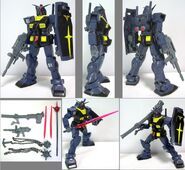 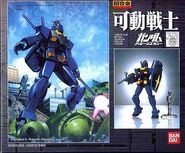 Retrieved from "https://gundam.fandom.com/wiki/RX-78T_Gundam_Titans_Version?oldid=469413"
Community content is available under CC-BY-SA unless otherwise noted.