The RX-78-SP Gunner Gundam is a variant of the RX-78-2 Gundam that first appeared in MSV-R.

Based on the RX-78-2 Gundam, the Gunner Gundam is designed after the One Year War with a focus on strengthened medium range support capabilities. However, as its design ended up being very versatile, it can be deployed for all kinds of combat operations. It has enhanced firepower and armor, with all the new equipment integrated into its body to maintain mobility. It is said that some of the FA-78-2 Heavy Gundam's designs are utilized to shorten the Gunner Gundam's design period. As a result, both machines have similarities in areas such as basic performance and fire control systems.

A new composite sensor is added to the right side of the head, improving the machine's ranged combat capabilities. A movable visor protects the main twin-eye cameras on the front of the head, and although details are unclear, it seems this visor serves as one of the countermeasures against the electromagnetic waves generated when the sensor is active. Another notable feature of the Gunner Gundam is its newly designed, enlarged backpack. Not only does this backpack have four high output thrusters and a small propellant tank, it also has a new sensor pod mounted on the top that can receive all kinds of radio waves even when under the influence of Minovsky particles. This makes the Gunner Gundam very suitable for force reconnaissance mission as well as being an ambush sniper.

By using a specialized beam rifle in tandem with the new composite sensor on the head, the Gunner Gundam is capable of ultra-precise shooting. The Gunner Gundam's tendency towards sniping missions is reflected in its model number of 'RX-78SP'. While the Gunner Gundam's high combat capabilities are recognized even while it was still in the design stage, its development was halted near the end of U.C.0080 as it was determined that the completed RX-78-6 Mudrock Gundam was more than capable of carrying out the same role.

A pair of head-mounted shell firing weapons, they have high rate of fire but little power and are generally ineffective against mobile suits. However, they can damage lightly armored areas such as the sensors, and ideal for shooting down small, lightly armored targets such as missiles, small vehicles, etc.

Specifically developed for the Gunner Gundam, it is a high output beam rifle meant for long range shooting. Its output is 30% higher than normal beam rifle, and by operating in tandem with the composite sensor on the right side of the head, it can achieve the same level of precise shooting as the primary cannons of the Earth Federation Forces' cruisers. After the war, the Earth Federation Forces acquired some of the technologies that the Principality of Zeon used in their beam rifles. It is said that some of these technologies were utilized in the development of this weapon.

The beam saber is a small device held in the mobile suit's hands when deployed and is powered by a rechargeable energy capacitor. It emits high-energy Minovsky particles to form a blade-shaped I-field (via manipulation of electromagnetic fields), and then fills this I-field shell with superheated Minovsky particle plasma to produce an effective cutting blade. The Gunner Gundam has two beam sabers, one stored in the outer side of each leg.

Equipped on the top of the backpack. It is fitted with the latest electronic equipment, making it possible to receive weak radio waves even under the influence of Minovsky particles. The sensor pod can be used for search operation, jamming, etc.

U.C.0080, shortly after the end of the One Year War, the Earth Federation Forces began investigating the seized Principality of Zeon's mobile suits and verifying mobile suit combat tactics. This was to have a better grasp on the form of the battle/combat which had undergone a major change due to the appearance of mobile suits. Additionally, such studies were also necessary for the development of mainstay mobile suits.

Simultaneously, the Earth Federation Forces was in a hurry to restore the military balance, and continued to develop new mobile suit while improving and repurposing existing mobile suit designs. It was under such a situation that the RX-78SP Gunner Gundam, which had enhanced medium range support capabilities, was designed. Despite its excellent capabilities, the Gunner Gundam's development was terminated near the end of the year as it was determined that the RX-78-6 Mudrock Gundam could fulfil its role. While no operable Gunner Gundam existed, a mock-up model was built using the RGM-79 GM as the base unit.

Participating in the ending stages of the One Year War, it is an RX-78-2 Gundam fitted with add-on equipment that gives it similar capabilities as the Gunner Gundam. Besides having additional armor applied to each body part, it also has the same thruster and sensor layout as the Gunner Gundam, with its head having additional composite sensor as well as protective visor mounted over the eyes. Its armaments include the Gunner Gundam's specialized beam rifle, beam sabers, a large diffuse beam cannon, a pair of E-2 beam spray guns, a shield, etc. This mobile suit appeared in the manga, MSV-R: Legend of the Universal Century Heroes: Rainbow's Shin Matsunaga. 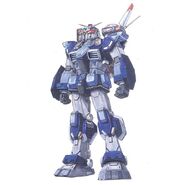 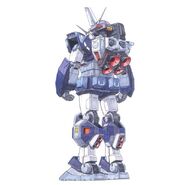 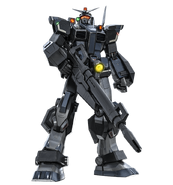 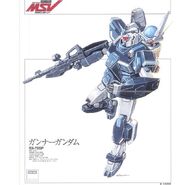