The RX-78NT-X (MRX-003) NT-X (aka Netix) is a Mobile Suit which was featured in the video game SD Gundam G Generation Series.

Developed from the RX-78NT-1 Gundam "Alex", the NT-X was created to research the psycommu technology obtained from the Principality of Zeon's research institutes. It was armed with a pair of large wire-guided bits on its back, allowing it to perform all-range attacks.

A weapon used by Kotezu's unit.

A pair of twin beam launchers hidden underneath the forearm armor, these replace the Alex's Gatling guns. They are most effective at mid-range.

Built after the One Year War, the NT-X was a testbed MS used by the Augusta Newtype Lab to improve Zeon's psycommu system.The suit was later transferred to the Murasame Newtype Lab and assigned with the model number MRX-003.

While never seen in actual combat, NT-X's test data greatly helped the Earth Federation to develop a miniature psycommu system and its wire-guided bit served as an early model of the INCOM quasi-psycommu system.

In U.C. 0084, Kotezu's Full Armor Alex was modified into an NT-X based on data from the Murasame Lab. It later participated in the final battle with True Federal at Side 7. 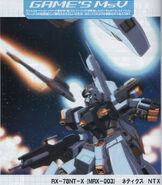 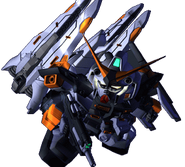 NT-X as it appears in SD Gundam G Generation Spirits 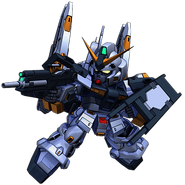 Retrieved from "https://gundam.fandom.com/wiki/RX-78NT-X_NT-X?oldid=460081"
Community content is available under CC-BY-SA unless otherwise noted.