The RX-78GP03 (RX-78GP03D) Gundam "Dendrobium" (aka Dendrobium, GP03) is the third unit of the Gundam Development Project, and the combination of both the mobile suit unit - the RX-78GP03S Gundam "Stamen" - and the armed base "Orchis". It was first featured in the OVA series Mobile Suit Gundam 0083: Stardust Memory and later, the Episode 4 of Gundam Evolve motion pictures. It was piloted by Anaheim test pilot Defrah Kar and Federation MS pilot Kou Uraki.

Developed for base defense in space, the Gundam "Dendrobium" consists of two parts: the mobile suit Gundam "Stamen" and the Armed Base "Orchis".[2] The "Orchis" was essentially a massive mobile arsenal, featuring a variety of weapons and allowing the "Dendrobium" to switch to different weapons after deployment for different battle scenarios, from long range to close range combat. In addition to its massive array of weapons, the "Orchis" also boasts impressive mobility thanks to its large propellant capacity, and was able to rival a Zeon mobile armor in combat abilities.[3] It was also equipped with a large I-Field generator on its right side for protection against beam weapons.[4]

A battleship-grade mega-particle cannon is installed on the Orchis right side. It is handled and fired via a pivoted control trigger to be used by Stamen's right arm and MS manipulator. The trigger provides better maneuverability and targeting adjustment of the gun. Its single beam shot is powerful enough to destroy Zeon's Musai-class or Zanzibar-class cruisers, but is ineffective against mobile weapons with I-Field capability. The Mega Beam Cannon's long and thick barrel can also be utilized as emergency charging weapon like a shot lance.

The hilt of Large Beam Saber is stored inside the Orchis' large claw arm. Like most MS-sized beam saber, it is a cylindrical device held by the claw arm's pincer when deployed and is powered by an rechargeable energy capacitor. The enormous beam blade generated is capable of cutting through any metal that has not been treated with anti-beam coating, and can slice off the deck of Zeon's Musai-class Late Production Type cruiser with ease.

Stored in the Orchis unit's weapons containers, the Micro Missile Pod is a large container which can store 36 micro missiles on each of the three sides for a total of 108 round capacity. When deployed, it is launched towards the enemy targets, and it fires a rapid salvo of micro missiles to bombard cluster of enemies. The micro missiles are capable of destroying the lightly armored Zeon MS such as Zakus and Doms.

Featured in Gundam Evolve's Episode 4, the 84-tube Micro Missile Pod has similar appearance to the 108-tube version, except that the 28 micro missiles are stored within each of the three rectangular panels, which open outwards after the container is being launched. The micro missiles are launched backwards to destroy persuing enemies.

Stored in the Orchis unit's weapons containers, the Large Missile Pod is a bundle of 3 large missiles with a detachable small rocket booster at the back. When deployed, it is launched toward the the targeted area, where the small rocket booster will be detached and each missile will home towards intended enemy targets. A single missile is capable of destroying Zeon mobile suits, but it is ineffective against heavily-armored mobile weapons, such as AMX-002 Neue Ziel.

Stored in the Orchis unit's weapons containers, it is a rocket-guided, 500 meter-plus long cable being encased with explosives. When deployed, the Demolition Chain is fired toward and surrounded the intended target, and detonates in close proximity without actually attached to the target. A single Demolition Chain is powerful enough to destroy a Zeon's Musai-class cruiser.

Stored in the Orchis unit's weapons containers. This beam rifle looks identical to the one used by the RX-78GP01-Fb Gundam Full Burnern "Zephyranthes", but its output has been improved. Can be used by the Stamen when it docked with the Orchis.

Mounted on the underside of the Stamen's beam rifle, it is a small beam saber designed to catch enemy beam sabers, allowing the pilot to quickly counter when there is no time to draw out its main beam saber.

Stored in the Orchis unit's weapons container. It is specially designed for the Stamen, and is usable whether the suit is operating alone or docked with the Orchis. It features a collapsible barrel for storage inside the Orchis' container, and retrievable via Stamen's Folding Arms. Like the Hyper Bazooka used by other Federation's mobile suits, the Folding Bazooka is technically a large projectile launcher which fires large-calibre rocket-propelled rounds to attack targets at long range. No mass-production MS's armor is able to stop this weapon. While very powerful, the rockets has a slow rate of fire and is most often used to take out slow, heavily armored targets. The Folding bazooka is magazine-fed and capable of carrying 6 rounds per magazine plus 1 round in its chamber.

Stored in the Orchis unit's weapons container. It is specially designed for the Stamen, and is collapsible along its vertical axis for storage inside the Orchis' container, and retrievable via Stamen's Folding Arms. The Folding Shield is mounted on the Stamen's forearms via a rotatable hinge and has top and bottom handles for better defense positioning. The shield can also store up to 4 e-pacs for the XBR-BOWA M-82A Beam Rifle, prolonging the rifle's operation time.

Each of the Stamen's forearms incorporate a large, foldable manipulator arm. They are used to retrieve the Stamen's own MS weapons and equipment such as beam rifles, folding bazookas, folding shields etc. from their storage racks inside the Orchis' weapons container pods.

Mounted on either sides of the Stamen's waist, the pair of tail binders serve to increase the suit's mobility and maneuverability. Besides having a thruster each, the binders are also used for AMBAC purposes due to their movable nature. Lastly, the tail binders also function as part of the docking system with the Orchis unit.

The Orchis unit has two weapons containers for carrying/storing various weapons in sixteen weapon slots. Weapons stored in the containers include a set of Demolition Chain Mines, 3-tube Missile Pods, sets of 108-tube Micro Missile Pods, and handheld weapons for the Stamen unit, such as beam rifles, folding bazookas, and folding shield.

The Orchis is equipped with an I-Field generator for defense from range beam attacks, though it could still be hit by physical attacks. The generator's greatest weakness was that the housing unit was exposed on the left side of the Orchis. This drawback make it easier for an enemy to damage the I-Field Generator, as demonstrated by AMX-002 Neue Ziel's all-range attacks.

The Dendrobium is equipped with numerous Chaff Launchers all around the body of Orchis unit. In situation where it requires a speedy retreat from battlefield, the Dendroium could launch a large salvo of chaffs to blind and distract enemies for a short period of time.

The RX-78GP03 Gundam "Dendrobium" was the third unit built as part of the Gundam Development Project. Unlike the first two the Dendrobium was never brought down to Earth, instead remaining in space aboard the La Vie en Rose under the supervision of Earth Federation Forces security officer Nakohha Nakato and Anaheim Electronics systems engineer Lucette Audevie. After the Delaz Fleet used a nuclear warhead to destroy a third of the Federation forces at Konpei Island for the naval review, and the subsequent mutual destruction of both the "Zephyranthes" and "Physalis", the Albion (MSC-07) docked at the La Vie en Rose for resupply and repairs. During that time both captain Eiphar Synapse and pilot Kou Uraki argued that they should be given the "Orchis" and "Stamen" components so that they could continue their pursuit of Gato. However Nakoha Nakato would not allow them to take the mobile weapon. Lucette Audevie, who was in charge of the "Dendrobium's" construction and development, helped the crew of the Albion to steal the mobile weapon at the cost of her own life.

While it was designed for defensive use, pilot Kou Uraki would use the "Dendrobium" offensively in a series of devastating hit and run attacks against the Delaz Fleet, returning to the Albion (the ship and the rest of its mobile suits staying to the rear away from combat) to be resupplied. With its large amount of missile ordnance, the "Dendrobium" made for a dangerous opponent for Gato's AMX-002 Neue Ziel which relied on its I-Field generator for most of its defense. Both machines were heavily damaged after their last confrontation outside of the colony the Delaz Fleet was dropping on North America, but only pilot Kou Uraki survived. Although the Orchis was damaged beyond recovery, the Stamen was left relatively intact, atlhough it is unknown what happened to it following the conclusion of Operation Stardust and the burying of the Gundam Development Project.

A variant of the "Dendrobium", which consisted of the "Stamen" equipped with a simplified version of the "Orchis", consisting of four boosters, the mega beam cannon, the I-Field generator, and four micro missile containers. The "Stamen"'s weapons, including the long range beam rifle, are mounted on the side of the missile containers and can be retrieved using folding arms. This variant was first introduced in Gundam Fix Figuration and later appeared in Mobile Suit Gundam 0083 Rebellion as the Stamen Weapon System. Rebellion also established that the Stamen Weapon System was propelled by a electric propulsion engine that ejects ionized Minovsky particles, with the implication that it was the predecessor to the Minovsky Drive. 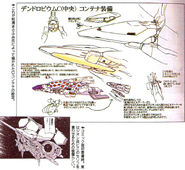 Central Container from 0083: Hero of Stardust: linearts and comments by Masafumi Matsuura

Grabbed by Neue Ziel and its Sub-Arms (Ep 13)

Weapons being launched from the Weapon Containers

Gundam Dendrobium and The Point of No Return

On the cover of Newtype magazine (October 1992) 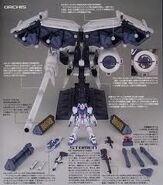 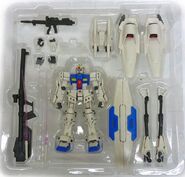 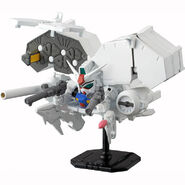