After countless battles with powerful foes, the elite GBN Diver Ogre upgraded his Gundam GP-Rase-Two into the Gundam GP-Rase-Two-Ten.[1] It is fitted with a pair of newly created GN Revolver Bazookas and the claws on its binders are changed to the Ogre Claw Ten.[1] The Gunpla's unique Trans-Am System, the Ogre Trans-Am, has also been upgraded.[1] As a result of the changes, the Gunpla has gained improved performance in all areas.[1]

GN Eyes Blasters are beam guns built into the sides' Flexible Ogre Binder Tens for wide-range attacks.[1] Four per binder, they are covered by hatches when not in use.[1] When in use, the hatches flip open and the GN Eyes Blasters are exposed for firing.[1]

The yellow part on each knee armor is a beam gun.

Striking weapons that can also be used as wired, remote-controlled weapons, one is mounted on the tip of each Flexible Ogre Binder Ten.[1] The pair of Ogre Claw Tens are improved version of the Gundam GP-Rase-Two's Ogre Claws, with altered claw shapes to grip the GN Ogre Sword Ni Shiki.[1] Like the original, they can also be used to restrain enemies and each claw can generate a beam blade from an emitter located in the center.[1]

A pair of powerful revolver-type cannons created for the Gundam GP-Rase-Two-Ten.[1] GN Drive Taus are built into the cannons, giving them devastating destructive power.[1] They can be fired while mounted behind the shoulders, but their grips can unfold to be held, which dramatically increases their accuracy.[1]

A pair of large swords that can be used as shields by imbuing them with GN Fields.[1] Additionally, a massive twin sword, the GN Ogre Twin Sword Ni Shiki, can be formed by connecting the two swords together.[1] Unlike the Gundam GP-Rase-Two, the Gundam GP-Rase-Two-Ten stores the swords on its rear skirt armor instead of behind the shoulders.[1]

The pair of Flexible Ogre Binder Tens on the sides are upgraded version of the Gundam GP-Rase-Two's Flexible Ogre Binders.[1] Like the original, they are multi-purpose equipment that specializes in offensive abilities.[1] They have a wide variety of functions, such as improving the Gunpla's mobility by serving as movable limbs of the AMBAC system and have offensive functions in the form of the GN Eyes Blasters for range attacks and the upgraded Ogre Claw Tens for close combat.[1]

The Gundam GP-Rase-Two-Ten uses an upgraded version of the Gundam GP-Rase-Two's Ogre Trans-Am, but details of the upgrades are unknown.[1] When used, the visor normally on the forehead is lowered to cover the twin eyes and a special lock-on mode known as "Oninome Mode" is activated.[1] In this mode, the sensors focus on and analyze a single enemy.[1] Its menacing gaze cannot be broken until its prey is devoured.[1] 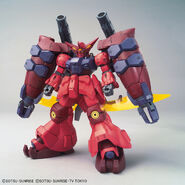 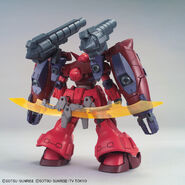 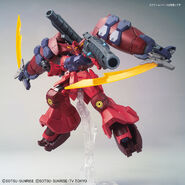