The Gundam GP02A (Type-MLRS) is designed by the Earth Federation for attacking enemy bases or to provide mid-range support for friendly forces. It features the Multiple Launch Rocket System (MLRS), an alternate equipment for the Gundam Physalis when the nuclear warhead is not required in battle. Under this setting, the original atomic bazooka is removed and the MS is instead equipped with a six-tube MLRS with three tubes mounted on each side of the backpack.

Mounted in the head, these shell firing weapons have high-rate of fire but little power and can't damage the thick armor of a mobile suit, though they can damage lightly armored areas such as the sensors. They are ideal for shooting down small, lightly armored targets such as missiles, attack vehicles, etc.

The Physalis is equipped with a pair of A.E.Blash AEXB-909L beam sabers stored in waist-mounted racks. The output of these sabers can be manually adjusted and at the highest setting can overpower GP01-Fb's beam saber.

The Gundam Physalis is equipped with a unique NR-Sh-02-RX/S-00013 model shield. The large shield serves not only as additional protection for the Physalis against physical and beam weapons, but it also features a powerful cooling system designed to help protect the Physalis from the edge of a nuclear explosion.

Mounted on the backpack, the MLRS features three tubular missile containers on each side for a total of six containers. The missiles can be be fired at a set time interval, or all of them can be launched at once to deal serious damage to a targeted area.

Equipped by the Gundam GP02A (Type-MLRS) in the Gundam Area Wars video game, this is the same beam rifle as used by RX-78GP01 Gundam "Zephyranthes"

Mounted on the underside of the beam rifle, it is a small beam saber designed to catch enemy beam sabers. It allows the pilot to quickly counter when there is no time to draw out his main beam saber.

The MLRS Type was one of multiple weapon plans for the Gundam Physalis. This equipment was designed for destroying the Zeon Remnants still hiding in Africa and Eurasia. Though it was not completed in time for the field test at Torrington Base, according to a JCAP simulation ran by Anaheim Electronics, it had enough firepower to destroy an entire city. However, since the Gundam Physalis was stolen by Anavel Gato, this plan was never produced.

In Mobile Suit Gundam Katana, the Gundam Physalis was reproduced and equipped with the MLRS (reduced to 5 units) as well as the Beam Bazooka. It was piloted by Kanesada Tsurugi. 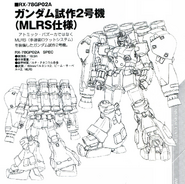 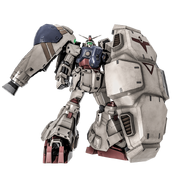