The RX-78GP02A Gundam "Physalis" (aka "Physalis", GP02A) is the second of four mobile suits in the Gundam Development Project featured in Mobile Suit Gundam 0083: Stardust Memory. Originally belonging to Earth Federation, it was stolen and piloted by Delaz Fleet's ace pilot, Anavel Gato.

The Gundam "Physalis" was initially supposed to be an assault-use, heavy mobile suit similar to the Principality of Zeon's Dom series. This was eventually dropped and replaced by the goal of being the most powerful MS to date. Inadvertently, this led to the Physalis being armed with the most deadly weapon available, a nuclear warhead. The second research division of Anaheim Electronics in charge of developing the Physalis was mainly comprised of former Zeon engineers, so Zeon-based technology is strongly incorporated into the mobile suit.

The Physalis uses an atomic bazooka to launch the Mk-82 warhead, but due to the bazooka's relatively short firing range, the mobile suit's armor was designed to be both heat and shock resistant to protect itself from the nuclear blast. Similarly, to ensure the pilot's safety when the Physalis operates near the blast area, its cockpit was designed to be more impact resistance and with higher pilot survivability than normal mobile suit's. Instead of a Core Block System, the Physalis utilized a spherical cockpit block that was first proposed at the end of the One Year War, and it is protected by multiple layers of composite armor and cushioning material.

The cockpit itself is also filled with powerful neutron moderators to better protect the pilot from the harmful effects of being near the blast area. In case of emergency, the cockpit can be ejected with explosive bolts. The Physalis also carried a large shield that contains a powerful cooling system. This shield also stores the barrel of the bazooka when the weapon is not in use. Other weapons of the Physalis included two head-mounted Vulcan guns and two beam sabers stored in the side skirt armor.

Despite its bulky appearance, the Physalis is highly maneuverable and can hover when operating under gravity. This is thanks to the newly developed high-output generators installed in the mobile suit, as well as the pair of 'Flexible Thruster Binders' mounted on the shoulders that house multiple thrusters. Overall, the Physalis is a powerful mobile suit even without its nuclear weapon. It was also rumored to be designed to work in tandem with its brother unit, the RX-78GP01 Gundam "Zephyranthes".

While nuclear weapons were abhorred due to their destructive effects, the leaders of the Earth Federation Forces viewed them as a necessary evil to maintain its superiority in the post-One Year War period. In fact, the Principality of Zeon had deployed or attempted to deploy nuclear weapons on multiple occasions during the war, even after the signing of the Antarctic Treaty. Furthermore, the Antarctic Treaty only prohibited the "use" of nuclear weapons as opposed to the "development" and "storage" of them. Thus, the Physalis was technically not a violation of the treaty.

There were also some that viewed the Antarctic Treaty as a wartime treaty that was defunct in the post-war period, but there were others that thought differently. Aiguille Delaz of the Delaz Fleet, a Principality of Zeon remnant group that eventually stole the Physalis, was an example, albeit a radical one. He considered the treaty still in effect as he did not recognize the peace treaty signed at the end of the One Year War. He then used this supposed violation by the Earth Federation Forces to rationalize the capture and use of the Physalis and its nuclear weapon.

An improved beam saber model developed for heavy mobile suits, a pair of them are stored in Physalis' side skirt armor. The magnetic field shaping its beam blade was thinner than previous models, but due to its prototype nature, its output and magnetic field intensity can be adjusted.

The primary weapon of the Physalis, it can load a single Mk-82 nuclear warhead that is carried separately in the backpack. Although the bazooka only had a single shot, its effect is not to be underestimated, as demonstrated when Anavel Gato used it to destroy two-thirds of the Earth Federation Forces fleet gathered for the Naval Review at Confeito. The nuclear warhead must be used carefully, for even the Physalis' armor and cooling system can only protect the mobile suit from the edges of a nuclear explosion. The Atomic Bazooka is a two-piece system. The warhead is loaded into the rear end, which is mounted on a swivel located on the back of the Physalis' right shoulder, while the barrel of the bazooka is stored in its shield. The two halves of the bazooka lock together when used to fire the nuclear warhead, and the entire weapon can be jettisoned after use.

A type of nuclear warhead called a "self-restraining thermonuclear bomb," which explodes while retaining the degenerate layer of Minovsky particles it contains, creating a fireball of ultra-high temperature and enormous neutron radiation that lasts for several seconds.

The Gundam Physalis is equipped with a specialized shield. This large shield is not only a defensive measure against physical and beam attacks, it also protects the Physalis from the heat and shock of a nuclear explosion. It also features a powerful liquid nitrogen cooling system to cool the mobile suit, and is where the Atomic Bazooka's barrel is stored when the weapon is not in use. Thus, damage to the shield can hinder the Physalis' ability to launch a nuclear attack. Also, since the shield's protective range does not extend to the legs, the legs are equipped with equivalent armor and cooling functions.

In the manga, Mobile Suit Gundam 0083 Rebellion, Gato's Gundam GP02A utilized this weapon from a defeated RGM-79V GM Night Seeker. It is a spear-like weapon with several beam blades at the top. Due to its long handle, the beam javelin has a long reach, providing a considerable advantage in close quarters combat. It can also be used as a throwing weapon.

Developed in the early phase of One Year War, the long-barreled 135mm anti-ship rifle is used by various Zeon mobile suits for long-range sniping attack against Federation's warships. It fires highly accurate solid rounds which can heavily damage the Federation's Salamis-class cruiser. During the events in Mobile Suit Gundam 0083: Mayfly of Space 2, Gato's Gundam Physalis is armed with this weapon.

In UC 0083, the Pegasus-class assault carrier MSC-07 Albion collected both the RX-78GP01 Gundam "Zephyranthes" and the RX-78GP02A Gundam "Physalis", and shipped them to the Earth Federation's Torrington Base in Australia for terrestrial testing. Thanks to the help of a Delaz Fleet supporter in Anaheim Electronics, former Zeon ace pilot Anavel Gato a.k.a The Nightmare of Solomon managed to sneak aboard the Albion and stole the Physalis after a nuclear missile from the Torrington Base's stockpile had been loaded into it. Taking advantage of a long range missile bombardment initiated by his teammates, followed by a blitzkrieg attack by a pair of MS-09F/trop Dom Tropens, Gato in the Physalis began making his getaway, but not before being confronted by Ensign Kou Uraki in the Zephyranthes. The two engaged in a beam saber battle but Kou was overwhelmed when he discovered he was battling the "Nightmare of Solomon".

As Gato made his escape with the Physalis, he set out to rendezvous with a Komusai II shuttle so that he could get the Physalis into space. However, the shuttle was destroyed when Kou's Zephyranthes attacked with a machine gun, but the Physalis escaped undamaged. With the loss of the Komusai II, Gato and his team were forced to go to their backup plan, and headed straight for the coast to rendezvous with the U-801, a refit Jukon-class submarine.

In order to ensure success in their mission, the Zeon team set up an ambush to destroy the pursuing Earth Federation Forces mobile suits in the mist shrouded rocks by the shore. However, the enemy had expected this and managed to turn the tables, destroying the Physalis's two escort machines. Gato and the Physalis ended up getting into another beam saber duel with Kou and the Zephyranthes. With Gato's skill, the Physalis quickly overpowered its brother unit, however the Gundams' designer, Nina Purpleton, arrived and advised Kou to thrust the beam saber into the Physalis's shield, which damaged the Physalis's cooling system. With little choice, Gato escaped with the Physalis on a mobile suit transport hovercraft.

Gato took the Physalis to the Kimberlite Base in eastern Africa where Zeon remnant forces gave Gato an old H.L.V. to take the Physalis into space. During the launch, the Kimberlite Base's mobile suit forces fought with the mobile suits of the Albion to buy Gato time. As the H.L.V. was taking off, the Albion fired its main guns, nearly hitting it, but the H.L.V. escaped into space.

In space, Gato returned to the Delaz Fleet, bringing the Physalis to their secret base. The mobile suit was then used as a propaganda tool on an Earth Sphere-wide broadcast speech made by Admiral Delaz. Delaz called the Earth Federation hypocritical and underhanded for creating a mobile suit capable of deploying nuclear weapons despite it being in violation to the Antarctic Treaty.

After making their intentions clear with the speech broadcast, the Delaz Fleet headed to Konpei Island, with the Physalis serving as a key component to their battle plan. Knowing that they could not win in a head on battle, Delaz intended to make use of the Physalis's nuke. Using the Physalis's high speed and agility, Gato slipped through a debris field left after the One Year War, and then through Earth Federation defenses on the edge of the Naval Review. Once in position, Gato fired the nuclear weapon, destroying or disabling two-thirds of the gathered Earth Federation space fleet at the Naval Review.

As Gato made his escape, he and the Physalis once again faced Kou who was piloting the upgraded RX-78GP01-Fb Gundam Full Burnern "Zephyranthes". The two pilots and machines engaged in an intense battle, this time with Kou matching Gato evenly thanks to his new found experience and more powerful Gundam. The battle eventually ended in the mutual destruction of both machines, though both pilots survived.

The data of the Physalis was later used to produce the Axis mobile suit, AMX-017 Gigantic, another tactical-nuke using mobile suit.

A refurbished unit appears in Mobile Suit Zeta Gundam Define, fitted with the latest parts from Anaheim Electronics. Kylie Johnson of Club Works recommends it as a candidate for the base model of a new MS for the AEUG (introducing it as a successor to the Dom MS), and Captain Quattro Bajeena is the test pilot, but he points out its maneuverability problems due to its old basic design.

Front, height comparison with a human 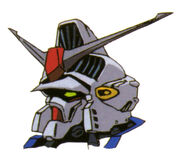 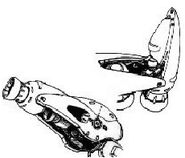 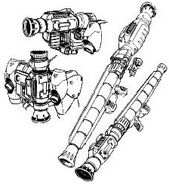 Aiguille Delaz declaring Delaz Fleet's war against the Earth Federation, with Anavel Gato and Gundam GP02A in the background (0083 OVA) 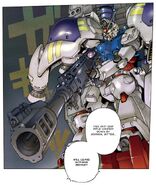 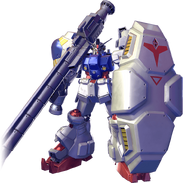 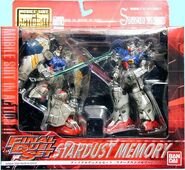 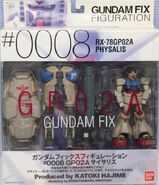 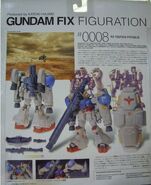 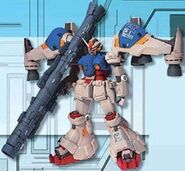 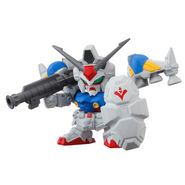 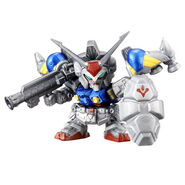