The RX-78GP01 Gundam "Zephyranthes" (aka Zephyranthes, GP01, Unit 1) is a prototype general-purpose mobile suit from the Mobile Suit Gundam 0083: Stardust Memory OVA series. It was piloted by Kou Uraki.

As described in the Master Grade model manual and MS Encyclopedia, at the conclusion of the One Year War, the Federation started the Gundam Development Project, aimed at creating mobile suits superior to those that Zeon had developed. The RX-78GP01 Gundam "Zephyranthes" was the second of five prototypes Gundam type mobile suit completed under this plan.

The RX-78GP01 was designed to be able to operate under any condition on earth or in space. To that end, its design is superficially similar to the other RX series Gundams. Unlike previous suits, this was one of the first to re-introduce the core fighter concept in its design, utilizing the recently developed FF-XII Core Fighter II as the cockpit. Though the GP01 is operable in both Earth and outer space, it needs to be configured for each environment before battle by using the appropriate Core Fighters. Otherwise, the GP01 will suffer from a lack of balance and become near impossible to pilot.

One major innovation in the RX-78GP01's arsenal was the addition of a beam rifle that used a removable energy capacitor called e-pac. Previous beam rifle designs had the energy capacitor integrated into the rifle directly, resulting in the rifle becoming dead weight once the capacitor was depleted. With e-pac, a beam rifle can be used as long as the pilot has a ready supply of replacement e-pacs. The RX-78GP01 has three e-pacs (one mounted on the rifle, two held in reserve on the shield) in its normal deployment configuration.

A close combat weapon that produces high-energy Minovsky particles to form a blade-shaped I-field filled with superheated plasma that creates a deadly cutting blade. Two beam sabers are stored on the backpack. This particular model is manufactured by Anaheim Electronics and can function as beam gun in core fighter form or mobile suit form.

The BOWA XBR-M-82A-05H beam rifle is the standard rifle for the Zephyranthes, power rated at 1.5 MW. It uses the new "e-pac" technology, which is a replaceable energy capacitor. Thus, when the beam rifle runs out of energy, swapping the e-pac with a new one allows the rifle to be usable again.

Mounted on the underside of the Zephyranthes' beam rifle, it is a small beam saber designed to catch enemy beam sabers. It allows the pilot to quickly counter when there is no time to draw out his main beam saber.

Technically a large rocket launcher, it fires 360mm missiles to attack targets at long range. No mass-production MS's armor is able to stop this weapon, but it has a slow rate of fire and a fairly little amount of ammunition.

Developed by Yashima Heavy Industries as a long-range weapon for use in 1G environment. It has an alternate model number: "NFHI·GMCa-type.09/". Its design is thought to have referenced the Zimmad Corporation’s ZIM/M-T-K175C Magella Top Cannon. It uses a six-round box magazine that is inserted into the top.

As with most other mobile suits, the Zephyranthes carries a physical shield for defense on its left arm. Two spare e-pacs could be stored behind the shield.

A hand-carried weapon originally used by the RAG-79 Aqua GM for amphibious combat, it contained a set of missile launchers and two large torpedoes. Used along with the Aqua Equipment in the Mobile Suit Gundam 0083 Rebellion manga.

The GP01 features a core block system that allows the cockpit and main engines to eject in the form of a fighter plane, preserving the pilot's life and vital combat data.

Appearing in the Mobile Suit Gundam 0083 Rebellion manga, the Chobham armor was a series of add-on heavy armor plates attached to the body of the GP01. Though it enhanced the GP01's defensive capabilities, it weighs down the suit tremendously.

In the Mobile Suit Gundam 0083 Rebellion manga, the GP01 could be equipped with the Aqua equipment for combat underwater. With this equipment, the GP01 is outfitted with the shoulder and calf hydrojet units from the RAG-79 Aqua GM along with a new hydrojet-equipped backpack. The shoulder units each contain four torpedo pods and the mobile suit also uses the same handheld missile launcher as the Aqua GM.

The RX-78GP01 was taken to Australia's Torrington Base for terrestrial testing, where it was commandeered by (and later assigned to) Federation ENS (later LTJG) Kou Uraki in his effort to retrieve the RX-78GP02A Gundam "Physalis".[1]

The GP01 was heavily damaged while defending the Albion from an attack by Cima Garahau's marine corp, the Cima Fleet. The Gundam was recovered and sent to Anaheim Electronics to undergo a massive upgrade into the RX-78GP01-Fb Gundam "Zephyranthes" Full Burnern. 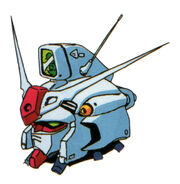 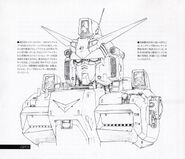 Torso structure, with Core Block system in the center 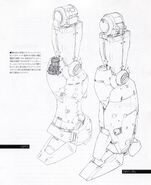 Sole details and comparison with the Full Burnern's sole (right) 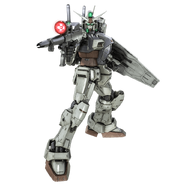 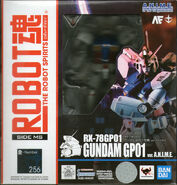 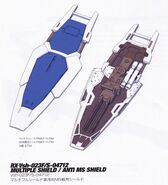