The RX-78GP00 Gundam "Blossom" first appears in the B-Club Gundam -Phantom Bullet magazine, and subsequently Dengeki Hobby Magazine "Gundam Secret Weapons" and Gundam Wars series. Although its existence and details in official plot are disputed, it is said to be a trial unit for the Gundam Development Project series.

Analysis of the recovered data indicated that the loadout caused weight balance issues, making piloting difficult. It was also discovered that the Gundam Blossom's multifunctional design caused a lot of stress for its pilot, thus the later four models of the Gundam Development Project all have their own unique function.

Also known as 'large beam rifle', it is attached to the right drum frame on Gundam Blossom's back, and has high firepower as well as long effective range. However, as it does not use the standard E-Cap system, it needs to be charged prior to each shot, and hence incapable of rapid fire. Additionally, its targeting accuracy is reliant on the Minovsky Particle Interference Wave Searcher (MPIWS).

The standard close range armament for most Federation mobile suits. The beam saber is a small cylindrical device held in the mobile suit's hands when operated and is powered by a rechargeable energy capacitor. It is capable of cutting through any armor not treated with anti-beam coating. The Gundam Blossom is equipped with a pair of beam sabers, that when not in use are stored in the shoulders. It is unknown if Gundam Blossom's beam sabers can serve as beam guns for the Core Booster II.

A disk-shaped radome device attached to the left drum frame on Gundam Blossom's back. While it has a wide sensing area, its reliability was low and frequently malfunctioned

The machine was destroyed during a patrol mission, but it is disputed as to exactly how. Phantom Bullet (the original appearance of this mobile suit which is an unofficial side story) states that it was "Destroyed in combat against Zeon forces." In Dengeki Hobby Magazine "Gundam Secret Weapons", it claims that it was "Caught in the collapsing wreckage of an abandoned ship." The Gundam Wars card game attests that "Due to all the equipment, the balance of the machine is lost and self-destructed on the test run." 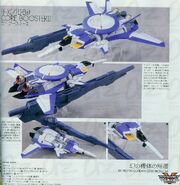 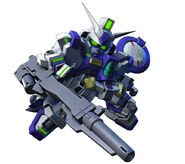