The RX-78E Gundam GT-FOUR was a variable mobile suit that appeared in the manga series Mobile Suit Gundam: MS Generation and whose principal mechanical designer was Rei Nakahara.

A prototype evaluation unit developed by the EFAF (Earth Federation Air Force) some time after the end of the One Year War as part of the "G4 Plan", the Gundam GT-FOUR (which stood for Gundam Transformer/Flight & Operations Unifications Reactors) was a multi-mode machine that aimed to expand the radius of roles a single MS could be purpose-designed for, mainly through a combination of combat aircraft and mobile suit, this variable design was considered an MS union. In addition, the GT-FOUR was capable of three transformation modes, B Mode, G mode and F mode.

B Mode, which stands for Booster Mode, was basically the Core fighter docked with a large booster unit. This form boasts high acceleration, although it is somewhat under-gunned and has disappointing maneuverability.

Also called the Fighter Mode, was the GT-FOUR in MS mode with the booster unit deployed horizontally, thus increasing the speed and mobility of the machine.

It stand for Ground Mode,that is the Mobile Suit form, The standard mode of the GT-FOUR.

Although the GT-Four was considered a breakthrough in transformable MS development, the design was plagued from various problems (design complexity, structural weakness etc.), and soon after development was officially ended. However, the development staff who had been involved with the project were moved to another research facility, where it is speculated that the GT-FOUR had become the basis of development for the ORX-005 Gaplant and NRX-044 Asshimar. 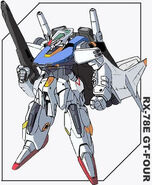 Retrieved from "https://gundam.fandom.com/wiki/RX-78E_Gundam_GT-FOUR?oldid=440859"
Community content is available under CC-BY-SA unless otherwise noted.