The RX-78AL Atlas Gundam is a prototype mobile suit that appears in Mobile Suit Gundam Thunderbolt. It is piloted by Io Flemming.

A close combat weapon that emits a blade-shaped beam from the hilt when drawn. The Atlas Gundam is equipped with two Beam Sabers, one stored in each shoulder armor, which opens up when the saber is drawn.[1]

Funded by the Moore Brotherhood, the Atlas Gundam was prepared by Monica Humphrey for the top secret Operation Thunderbolt. The Gundam and its pilot, Io Fleming, were flown to the Sydney crater via Medea to be assigned to the Pegasus-class assault carrier Spartan. When a Musai in orbit launched a kamikaze Komusai at the Spartan, the Atlas flew up to intercept the Komusai and bisected it with its beam saber, destroying it and saving the Spartan.

The Atlas Gundam was later used in the defense of the landing crafts in the Antarctic Circle, where it launched from the Spartan to assist the other MS. It took out several MSM-07 Z'Gok (Thunderbolt Ver.) and then dived underwater to pursue the Zeon remnant's submarine, but was intercepted by a MAM-07 Grublo (Thunderbolt Ver.). After a fierce battle, the Atlas Gundam took out the Grublo but could not surface due to damage sustained to its thrusters. Io then used the Atlas' beam sabers to propel his MS towards the surface, but the right beam saber ran out of energy due to its use in the battle. He was then rescued by Bianca Carlyle's  damaged RX-77AQ Guncannon Aqua. Due to damages received in this sortie, the Atlas Gundam was forced to sit out the battle between the South Sea Alliance's Border Patrol and the Spartan, with Io piloting a RGM-79C［G］ GM Ground Type-C instead.

In the manga, the Atlas Gundam participated in the operation to capture the Psycho Zaku Mk-II pilots at the Rig. While the Atlas Gundam displayed exceptional performance, taking out an entire team of Z'Goks and Zaku Marine Types, Fisher Ness's quick thinking allowed the Prober-class submarine carrying the pilots to escape after luring the Gundam to the Zock operated by Daryl Lorenz's team, which fired on the Gundam and forced it to evade, losing the submarine in the process.

Following the failure at the Rig, the Atlas Gundam was loaded onto a landing craft and used to stop the launch of the Psycho Zaku Mk-II units from the Taal volcano base. The landing craft was shot down by Daryl's Big Gun, but Io and Bianca escaped at the last moment and attempted to find a way into the volcano base while defeating enemy units underwater. They locate the underwater entrance to the base, but were eventually separated by a closing bulkhead. Alone, Io engaged Billy Hickam in his MSM-07 Z'Gok (Thunderbolt Ver.), who lured him to a submarine dock to fight him underwater where the Z'Gok had an advantage. With his firearms and ammo destroyed, Io had no choice but to fight him in close combat.

Io attempted to escape, only to have Sebastian's MSM-04 Acguy (Thunderbolt Ver.) fire at him using its Gatling Gun, forcing him to dive. Io managed to turn the tide by slicing off one of the Z'Gok's arms, and surfaced using Billy's disabled Z'Gok as a shield. Unable to fire and caught off-guard, Sebastian was killed when the Atlas' beam saber pierced its upper torso. Just then, Daryl arrived in the unfinished Psycho Zaku Mk-II unit 1, and engaged the Atlas in close combat. The Atlas cannot keep up with the Psycho Zaku Mk-II's speed and agility and was almost destroyed, but a stroke of luck saved Io as he dodged Daryl's finishing blow by grabbing onto a submarine, as well as the Psycho Zaku Mk-II's left arm disintegrating after its heavy usage. Io then cornered Daryl and tried to kill him, but the Living Dead Division's engineers as well as Claudia Peer's Zaku Tank intervened, causing him to retreat. The Zaku Tank nearly scored a hit on the Atlas Gundam, but Io sacrificed the Atlas' right arm by cutting it off to dodge the attack.

Io then chased Daryl as he tried to board the completed Psycho Zaku Mk-II unit 2, a move ending in Claudia's death (who took the blow meant for the Psycho Zaku MK-II). This caused both pilots severe trauma, with Daryl later retreating with the sudden appearance of Dents' and Orphes' RX-79［GS］ Gundam Ground Type S. With Io now uncontrollably grieving over killing Claudia, Bianca took control of the Atlas and exited the base just in time to witness the Psycho Zaku Mk-II Units' launch into space. 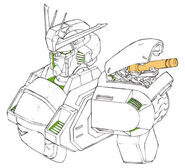 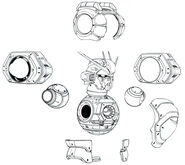 Arriving at the Spartan (Manga) 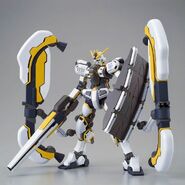