The RX-78-Z1 Zeon's Gundam is a mobile suit that first appears in the video game Mobile Suit Gundam Gihren's Greed.

In an alternate timeline where Zeon won the One Year War, Zeon's Gundam was constructed from the design plans of the RX-78-2 Gundam taken from the Earth Federation (GAMES MSV suggests that they were found in Jaburo's factories). Although identical in appearance to the RX-78-2 (except for its green Zeon paint scheme and use of MS-14A Gelgoog's shield), its interior mechanisms were completely revamped and featured parts derived from Zeon technology. However, despite these modifications, there were no significant changes to the machine's performance.

The beam saber is a small device held in the mobile suit's hands when operated and is powered by a rechargeable energy capacitor. It can cut through most armor not treated with anti-beam coating. The RX-78-Z1 has two beam sabers stored in the backpack. One can be used as a reserve weapon, or both can be used simultaneously in a twin sword fashion. The beam saber can also transform into the beam javelin.

The beam javelin is an alternate form of the beam saber, with an extended handle and a three-pronged beam at the end. The long reach of the weapon gives the RX-78-Z1 an advantage in close quarters combat. It was also used as a throwing weapon.

The beam rifle is the primary weapon used by the RX-78-Z1. Making use of E-cap (or "energy capacitor") technology, the rifle uses charged concentrations of Minovsky particles as ammunition. This gives the beam rifle firepower equivalent to that of a battleship's beam cannons. Features include a large, movable offset sensor that interfaces with the RX-78’s Fire Control System (FCS) to achieve a high degree of accuracy, and a stabilizing foregrip for firing support. A weakness of the beam rifle is that it could only be fired 16 times before depleting its energy and becoming useless.

A basic arm-mounted defense armament for many mobile suits. The shield is a thick sheet of armor designed to take severe punishment that would normally destroy a mobile suit. Since the introduction of beam weaponry, shield is treated with an anti-beam coating to withstand several beam shots before the coating wears off. Typically, physical shield can only take so much damage before it succumb to the pressure and break.

Similar to the prototype mobile suits produced by the Earth Federation Forces' Operation V, the RX-78-Z1 is equipped with a central block which houses the mobile suit's cockpit, control systems and main power source. This core block can eject in case of emergency and unfold into a small Core Fighter.

During the last weeks of the One Year War, the focus of the war effort shifted to outer space. Despite this many Zeon soldiers and mobile suit units continued to operate on Earth. One such Zeon mobile suit team was successful in their ambush of a Medea supply unit and their capture of an RX-78-2 Gundam unit. The captured unit was re-designated RX-78-Z1, repainted in the standard Green Zeon colors and was subsequently used against the Federation a number of times to great effect. For some time, the Gundam wreaked havoc amongst Earth Federation forces on Earth until a Federation Special Forces Combat Unit was able to intercept the stolen Gundam in New York and destroy it. Despite the victory for the Federation unit, the stolen Gundam shot down nearly two dozen RGM-79［G］ GM Ground Type and RX-79［G］ Gundam Ground Type units before it was destroyed. 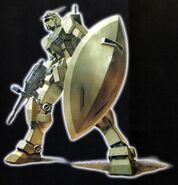 Retrieved from "https://gundam.fandom.com/wiki/RX-78-Z1_Zeon%27s_Gundam?oldid=459857"
Community content is available under CC-BY-SA unless otherwise noted.