The RX-78-7 7th Gundam (aka RX-78-7 Gundam) was intended to be the seventh mobile suit in the RX-78 Gundam Series, belonging to the Second Lot of Project V models. It first appeared as a part of Kunio Okawara's M-MSV. It was redesigned and featured in Mobile Suit Gundam: Battlefield Record U.C. 0081.

The design of the RX-78-7 7th Gundam received feedback from the FSWS Plan.[1] As such, it was designed from the ground up to equip Full Armor optional parts, namely the FA-78-3 and the HFA-78-3 options, and has mount latches for optional parts all over its body. It has a higher generator output than Gundam Units 1-6, which, coupled with sub-generators within the armor parts, allow it to operate with no loss in power even when equipped with Full Armor options. It is equipped with a number of advanced features, including magnet coating and a prototype panoramic monitor (though this was replaced with a standard cockpit in U.C. 0081).[2] Its performance is roughly on par with the RX-78NT-1 Gundam "Alex".[3]

The beam saber is a small device held in the mobile suit's hands when deployed and is powered by a rechargeable energy capacitor. It emits high-energy Minovsky particles to form a blade-shaped I-field (via manipulation of electromagnetic fields), and then fills this I-field shell with superheated Minovsky particle plasma to produce an effective cutting blade. Two beam sabers are stored in the Gundam's backpack. One can be used as a reserve weapon, or both can be used simultaneously in a twin sword fashion.

A custom-made weapon for RX-78-7, it has a longer range and a higher rate of fire compared to beam rifles from the One Year War era. Shares some parts with FA-78-3 Full Armor 7th Gundam's long range beam cannon.

A shield made of Luna Titanium alloy that can be mounted on the forearm. The shield also has spikes on the lower edge, which can be used for striking attacks in close combat.

The RX-78-7 was still in the design phase when the One Year War ended, and only the design of the frame was complete.[3] After the war, work on the Gundam continued at Augusta Base, where it was tested by Lieutenant Cherie Allison. In truth, however, Cherie Allison was actually Tatiana Doerr, a member of the Zeon Remnants group Invisible Knights. Though she performed her duty as test pilot faithfully, she also secretly sent intelligence on the base, including the Gundam's data, back to Zeon.[2]

In November, U.C. 0080, Liang Mao came to Augusta Base to look for candidates for a new special unit. Wanting to impress her, Lieutenant Samanan, a member of the Augusta Base defense force, took the 7th Gundam for a test run before requesting a simulation battle against Cherie. Angry that Samanan used the Gundam without permission, Cherie refused at first, but ultimately accepted after Samanan bragged that he was an ace pilot that shot down 15 Zeon mobile suits in the One Year War.[2]

During the simulation battle, Cherie managed to use the 7th Gundam far better than Samanan did, and easily defeated his GM. Angered that he is losing to a test pilot, Samanan drew his beam saber, even though it was forbidden to use it during simulation battles, but Cherie was faster, and chopped off the GM's hand with her own beam saber before "finishing off" the GM with a burst of paintballs to the head. Impressed by the battle, Mao Liang chose Cherie for the newly formed Phantom Sweep Corps. Though Cherie was reluctant when she heard that Phantom Sweep was created to hunt down Zeon remnants, she still agreed to join.[2] 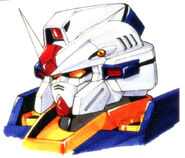 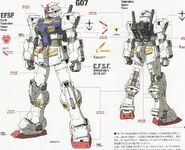