Based off the combat data of the RX-78-2 Gundam, the RX-78-6 Mudrock Gundam was designed to address the biggest shortcoming in the former's design - a lack of weaponry once the Gundam's primary beam rifle was out of energy. To get around this limitation, the Mudrock was built as a sustained-combat unit with higher firepower.

It has a new beam rifle backed up by a pair of arm-mounted grenade launchers, and a pair of 300mm cannons inspired by the RX-77-2 Guncannon. To further increase the Mudrock's staying power, it has improved frontal armor, and also retained the Gundam's beam sabers and head vulcans. The added payload wound up increasing the suit's weight by roughly one-third. To prevent this from affecting the suit's mobility, the Mudrock had a reactor with higher output, an enlarged backpack, and the legs are fitted with movable thrusters.

The beam saber is a small device held in the mobile suit's hands when deployed and is powered by a rechargeable energy capacitor. It emits high-energy Minovsky particles to form a blade-shaped I-field (via manipulation of electromagnetic fields), and then fills this I-field shell with superheated Minovsky particle plasma to produce an effective cutting blade. The Mudrock is equipped with two beam sabers stored beside the 300mm cannons when not in use.

A pair of low recoil cannons equipped on the backpack.

Equipped on both forearms. Each launcher carries 4 rounds for a total of 8.

A beam rifle developed near the end of the One Year War to test the concept of making the energy CAP a cartridge to solve the problem of recharge time. It was not finished in time, forcing the Mudrock Gundam to use the same type of beam rifle as the Gundam Ground Type instead.

The bullpup machine gun was a system weapon developed as a Space/Ground dual use projectile weapon. Though compact, it has sufficient anti-MS firepower while maintaining accuracy. Its muzzle velocity is increased due to the use of new gunpowder and this enables it to easily penetrate the armor of Zeon's mobile suit. A box-like sensor system incorporating a video camera and laser sensor is installed at the top, and when this system is used alongside the Gundam's targeting system, target acquisition capability is enhanced.

The Mudrock was originally supposed to be launched into space and participate in the Operation Star One. However, the attack by the Zeon's Midnight Fenrir Corp special forces on Jaburo on November 30, 0079, caused Lieutenant Agar to pilot the incomplete Gundam Mudrock for the protection of the Pegasus-class ship SCV-73 Blanc Rival. Despite the Gundam's firepower, it was damaged along with the ship. Mudrock was later repaired and deployed in its completed form to assist in the recapture of the California Base. However, Agar once again found himself against the Midnight Fenrir, and in the ensuing battle, the Mudrock Gundam was severely damaged and forced to retire. 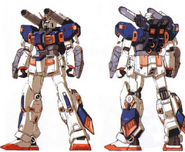 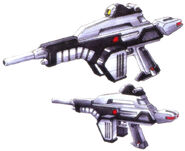 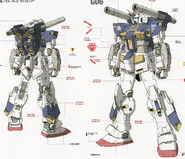 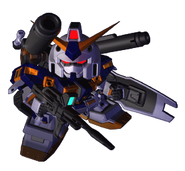 As featured in Gundam Battle Operation 2

As featured in Mobile Suit Gundam Side Story: Missing Link 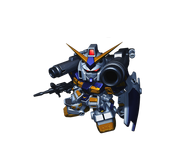 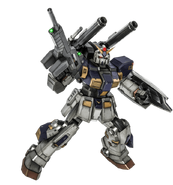 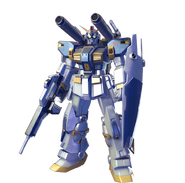 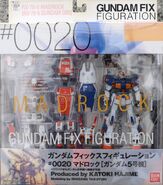 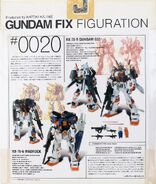