The RX-78-4 Gundam Unit 4 (aka "G04") is a Gundam from M-MSV original design series, designed as the 4th Gundam. Its design was updated for the video game Mobile Suit Gundam: Encounters in Space and the manga Mobile Suit Gundam Side Story: Space, To the End of a Flash.

The RX-78-4 Gundam Unit 4, more commonly referred to as "G04", was more advanced in many ways than its more famous predecessor. The Federation decided to convert the Gundam units 4 and 5, which were already in development, into space combat versions for use as main forces in the invasion of Solomon, A Baoa Qu, and then Zeon itself. These machines based on the RX-78-2, and the replacement of the backpack and the addition of thrusters and propellant raised their mobility by roughly 40 percent. Their operating time was also extended, and it was anticipated that they would produce great combat results during lengthy battles, especially in attacks on space fortresses.

The biggest change was the elimination of the core block system. The space freed up was used for cooling systems, thus increasing the generator output and enabling the use of more powerful beam weapons. As a result, the armament was upgraded to include a hyper beam rifle, and one beam gun was installed in each forearm. Plans were also made to equip unit 4 with a powerful, long range mega beam launcher. Thus, its generator output was further increased, its cooling systems were enhanced accordingly, and the design of the cooling fins in its chest was changed. Like the unit 5, the unit 4 can be outfitted with a booster pack which extends its operational range and time.

The beam saber is a small device held in the mobile suit's hands when deployed and is powered by a rechargeable energy capacitor. It emits high-energy Minovsky particles to form a blade-shaped I-field (via manipulation of electromagnetic fields), and then fills this I-field shell with superheated Minovsky particle plasma to produce an effective cutting blade. The G04 has two beam sabers stored in the backpack.

Also known as "Beam Gun Unit", one is mounted on each forearm. The weapon is undergoing verification of its combat effectiveness, cost, serviceability, etc. It has a short effective range and is most suitable for use in close combat.

An enhanced version of the beam rifle carried by the RX-78-2. In addition to having improved accuracy, its output is said to be 20% to 40% higher than the RX-78-2's model.

A high output, long range beam weapon with a total length of 12 meters. To ensure high precision, three targeting sensors are fitted on the weapon's long barrel. Due to the weapon's huge energy requirement, the G04's generator's increased energy output is still insufficient and an energy pack is attached to a mount latch below the backpack, on the left side, to provide additional energy. However, as the energy pack is still undergoing adjustments, it is rather unstable.

A basic defense armament for many mobile suits. The shield used by the G04 and G05 has a unique feature that allows it to collapse or extend to suit the combat situation.

An auxiliary generator for the Mega Beam Launcher. It is attached to a mount latch below the backpack, on the left side.

A special set of external fuel tanks and thrusters to give the unit higher speed and better maneuverability in space. The G04's operating time is also extended.

Deployed to the 16th Autonomous Mobile Squadron and assigned to the Pegasus-class warship, the SCVA-72 Thoroughbred, the RX-78-4 Gundam G04 was designed to be able to use a powerful mega beam launcher. The RX-78-4 only used the mega beam launcher once, in order to stop a reinforcing fleet from Granada. Though the launcher was successful in destroying the fleet, the load it put on the RX-78-4's additional energy pack was too much, resulting in an explosion that also killed the pilot.

In Mobile Suit Gundam: Encounters in Space, if the player acquires an "A" rank or higher in the mission to protect G04, its pilot Luce Cassel would miraculously survive the explosion with only minor injuries.

In the "IF" volume of Mobile Suit Gundam Side Story: Space, To the End of a Flash, Ford Romfellow managed to save Luce by ripping off the critical energy pack with the G05.

Either way, the G04 would then be upgraded with the same booster pack as the G05 and the two would participate in the Battle of A Baoa Qu. 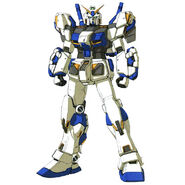 Explosion due to power overload 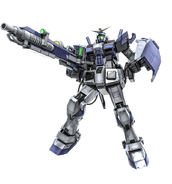 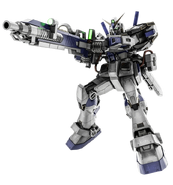 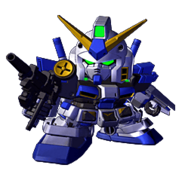 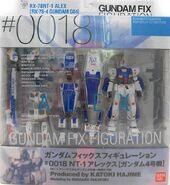 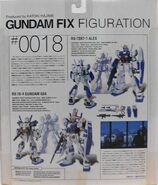 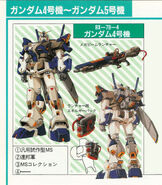