The RX-78-1 Prototype Gundam is the predecessor of the RX-78-2 Gundam first featured in the original design series Mobile Suit Variations.

The RX-78-1 Prototype Gundam is the third MS produced under the Operation V, developed at the Jaburo military headquarters on Earth. The starting point of the RX-78 series of mobile suits, the Prototype Gundam was designed differently from the other Operation V mobile suits models in that it did not place its emphasis on raw firepower like the RX-75 Guntank and RX-77-2 Guncannon. Instead, the RX-78-1 placed emphasis on fast, close quarters combat, similar to the Principality of Zeon's MS-06 Zaku II. In addition to thorough reduction in weight, cooling units are installed on the waist and knees to withstand battles in outer space, and a heat-resistant field system is also provided for entry into the atmosphere.

The RX-78-1 Prototype Gundam is also the first mobile suit to feature several new technologies, including the energy cap-based beam rifle (making the Gundam the first mobile suit to pack the firepower of a battleship), beam sabers and beam javelins for close combat. The Prototype Gundam also featured the Core Block System. Unlike the RX-78-2 Gundam, its ankle armor is equipped with multiple slit-like attitude control verniers, its knee armor is shorter, and the shape of its wrists are different. The Prototype Gundam's backpack was similar to that of the RX-78-2, but without the cowl.[2] The backpack's basic structure, such as the thruster and beam saber arrangement, was the same as its successor.[2]

The beam saber is a small device held in the mobile suit's hands when deployed and is powered by a rechargeable energy capacitor. It emits high-energy Minovsky particles to form a blade-shaped I-field (via manipulation of electromagnetic fields), and then fills this I-field shell with superheated Minovsky particle plasma to produce an effective cutting blade. Two beam sabers are stored in the Gundam's backpack. One can be used as a reserve weapon, or both can be used simultaneously in a twin sword fashion. The beam saber can also transform into the beam javelin.

The beam javelin is an alternate form of the beam saber, with an extended handle and several beam blades at the top. The long reach of the weapon provides a considerable advantage in close quarters combat. It was also used as a throwing weapon.

A dedicated hand shotgun-style beam rifle. Initially, the rifle was intended to be integrated into the Gundam's forearm when in use, with a strap on the rear end of the rifle and recesses on both forearms to hold it in place, but the straps were later eliminated along with modifications to the rifle's bolt. The right side armor is equipped with a slide-out holster to store this rifle.

The same portable firearm used by the Zaku II. It can switch between semi-automatic and automatic fire. Although useless against Luna Titanium Alloy, it can still destroy weaker armor material with multiple shots. It fires 120mm caliber rounds that are stored in a 100-rounds drum magazine. This weapon was used during a mock battle and it was loaded with paint ball ammunition.

Hand-carried, forearm-mounted or stored on the Gundam's backpack, the shield is a simple defense used to block most physical and beam attacks. Weighing 10 tons, its armor structure is a simplified version of that on the Gundam's body and is designed for the diffusion and absorption of impact rather than robustness. The outermost layer is a triple honeycomb structure using luna titanium alloy-based material.

A flail-type morning star with a long chain and anchor-shaped grip attached to a spiked iron ball. The weapon could either be thrown or swung around the mobile suit itself to damage the enemy units.

The prototype mobile suits produced by the Earth Federation Forces' Operation V, are equipped with a central block that houses the mobile suit's cockpit, control systems and the main power source. This core block can eject in case of emergency and unfold into a small Core Fighter.

A system that pumped out air to counter the friction heat of atmospheric entry. The mobile suit's internal cooling systems must also be engaged to deal with the heat that penetrates the air field.

The RX-78-1 was tested in conjunction with the FF-X5 Prototype Core Fighter on Earth before being shipped to Side 7, where it underwent further testing. Its Core Fighter was also refitted into the FF-X7 Core Fighter. When it first rolled out, its face, wrists, and waist were initially different compared to the RX-78-2 Gundam, though after several modifications, they became nearly identical. There was no record of it after its testing in Side 7. While the truth remains unknown, according to one unverified account, it was destroyed during the Zeon attack. 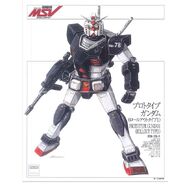 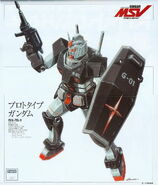 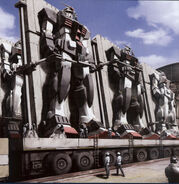 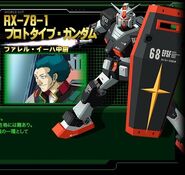 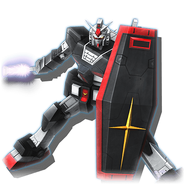 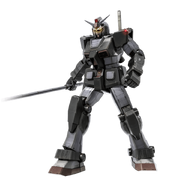 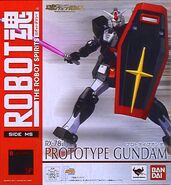 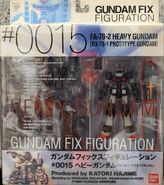 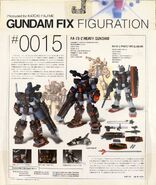