The operation tests of the RX-78-02, a prototype MS of the Earth Federation, were carried out in secret, but civilian Amuro Ray coincidentally became its pilot when Zeon Forces assaulted Side 7.

The RX-78-02 utilizes its wide array of portable weapons such as its beam rifle and hyper bazooka. It also has fixed weaponry such as two shoulder magnums on the left shoulder, a gatling gun on the right shoulder, and a forearm gatling gun on its left arm. It's also possible to swap a beam saber with an optional armament known as the shoulder cannon.

Furthermore its unable to transform its Beam Sabers to Beam Javelins, its Gundam Hammer doesn't exist, nor does it use the Core Block System until it was upgraded to have one at Jaburo.

As the war progressed to its latter stages, the RX-78-02 was reconfigured into its Late Type/Middle Type form. When the fighting was moved into space a majority of its fixed weapons were removed and swapped with extra thrusters for better mobility and gate shaped armor on the shoulders. Several fixed weapons were removed such as the arm vulcan, the two shoulder magnums, shoulder Gatling gun, and the shoulder cannon not being used more often.

A combat armament mounted on the backpack. Its blade-shaped beam can instantaneously cut through the armor of the mobile suit.

A medium range, solid shell firearm with a magazine mounted in the rear. It's set on the left side of the backpack after swapping out the beam saber and has a moveable base.

Installed on the left forearm, attached to the gate-shaped parts on the cuffs.

Equipped with two on the left shoulder. It was replaced with a second gatling gun for renovation to the Middle Type.

Equipped with one on the right shoulder in the Early Type and one on both shoulders in the Middle Type. They were changed to sensors for renovation to the Late Type.

The beam rifle is the primary weapon used by the Gundam. This weapon has also been confirmed to be utilized by the RX-78-01 Prototype Gundam and the GM, hence its similar appearance and equipment. A new form of the beam rifle called the Beam Rifle (Middle Type) was utilized during the later times of the war.

A general purpose fire support rocket launcher. It is used by carrying it over the shoulder and is frequently used by Amuro in tandem with the shoulder cannon for extra power.

An armament with extremely high defensive capabilities obtained by adopting a multi-layer structure made of multiple materials.

The project was proposed by Tem Ray in the year U.C. 0078 after he watched the footage of a MS-04 operating in the A Bao A Qu region. He immediately realized that, had the Federation gone ahead with mass-producing the Guncannon, geared toward ship combat at the time, the mobile suits would fare poorly against these Zakus. While the Federation at first believed the RCX-76 Guncannon would suffice, Tem's theory was proven true during the Battle of Mare Smythii, in which 4 MS-05 Zakus, alongside the MS-04 Bugu, wiped out the 12 Guncannons of the Iron Cavalry Squadron, and thus illustrated to the Federation the need of a mobile suit geared toward mobile suit combat, leading to the approval of the RX-78 Gundam development project. Amuro Ray later discovered that his father was not just working on colony construction as he discovered the suit's blueprints and a scaled-down RX-78-02 arm in his father's room [1].

The RX-78-02 was completed in its rollout colors of white and light gray. Its antennae was initially not V-shaped and instead more like the Guncannon Early Type. [2]. The staff at Anaheim Electronics later posed for a photo in front of their completed work [3].

On the day Zakus infiltrated the Side 7 Noa colony, Amuro Ray was at his computer accessing top-secret Federation data. After coming across another security layer, he opened a file containing a diagram of the Gundam's head. He saw the name "RX-78 Gundam", more "weird numbers" and schematics. As Fraw entered his house, Amuro also saw a diagram of a Zaku and how it had a fusion engine within its torso, strengthening his beliefs that his father had more than just colony blueprints [4].

Building a 3D model based on Katoki's minor redesign.[5] 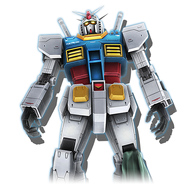 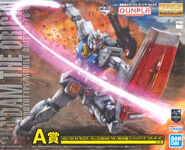 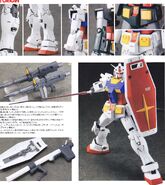