Before the One Year War broke out, the Earth Federation Forces promoted the "RX Plan" with the RX-78-01[N] Gundam Local Type, a prototype machine for environmental testing on Earth.[3] During ground testing, the yellow colored unit was fitted with a Shoulder Cannon-equipped backpack.[3] During offshore testing, the suit was retrofitted with underwater equipment and painted in a white and blue color scheme.[3] In the MSD files, a black "unidentified unit" similar to the Gundam Local Type was encountered by Principality of Zeon forces.[3]

A firearm for mobile suits developed by Yashima Heavy Industrial.[4] An improved production model was later used by other mobile suits.[4]

A compact shield for close combat that can be mounted on the left forearm, it has a bipod at the back.[4] Two beam sabers can be stored on the underside as well.[4]

A medium-range, solid-shell firearm with a magazine mounted in the rear.[4] It is set on the left side of the backpack with a movable base.[4] It boasts the power to destroy a Zaku II with one blow.[4] It is the same weapon as used by the RX-78-01[N] Gundam Local Type (Rollout Color) and RX-78-01 Prototype Gundam.[4]

A visor is attached to the suit's head, protecting it from dust and flashes of bright light.[4]

Around October of U.C.0079 when the deadlock of the One Year War was broken, it is said a black Gundam-type mobile suit appeared in a desert region in North America, and there occurred many cases in which the black Gundam wiped out the Principality of Zeon's MS forces it encountered.[4] In later years, a recorded video brought home by corporal Vasily Bosch formerly of the Y-02 Development and Training Team of the Zeon forces was analyzed, and the black mobile suit was judged to be the RX-78-01[N].[4] However, no official records exist about a black RX-78-01[N] in the Earth Federation Forces, and further investigation is sought.[4] 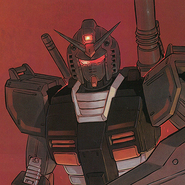