A mass produced, mid-range, artillery support unit, the Guncannon (Thunderbolt Ver.)'s joints are covered in special seals as a protective measure against the debris in the Thunderbolt Sector. It also has added sensors on its head for better search capabilities in the debris-filled area. A pair of low-recoil cannons are mounted on its large backpack. Additionally, it also uses a beam rifle as part of its standard armaments.

In the manga, the Guncannon served as the Beehive​'s commander-use mobile suit. At least two Guncannons were used in the diversion tactic against the Zeon snipers in the events leading up to the flagship fight and were wiped out by the MS-06R Zaku II High Mobility Type (Reuse "P" Device). One pilot had his main and backup cameras destroyed in an explosion and abandoned his mobile suit using the emergency pod. He was later killed by Layton, who fired on the pod using a machine gun. Several more Guncannons were later seen in the flagship fight and guarded the captured Papua-class Dried Fish at the end of the battle. Io Fleming handed over command to a Guncannon female pilot when he left to take on Daryl Lorenz. When the Federation surrendered to the Zeon reinforcements, the Guncannons were used to transport soldiers to a Chivvay-class. What happened to the Guncannons after this is unknown.

Guncannons and GM Cannons arriving at the Beehive. 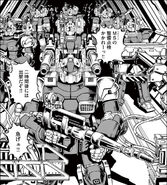 Guncannons and GM Cannons in hangar.