The RX-77-4 Guncannon II is a mobile suit developed from the RX-77-3 Guncannon Heavy Custom. It was first featured in the original design series Mobile Suit Variations.

Near the end of the One Year War, the Earth Federation Forces used the RX-77-3 Guncannon Heavy Custom as a base to develop a new Guncannon-type unit, the RX-77-4 Guncannon II. The Guncannon II also incorporated data from other prototype machines and became the final model in the RX-77 series. Unlike its base machine, the Guncannon II has a beam cannon on its right shoulder to resolve the balance and recoil issues related to using projectile cannons. The use of a beam cannon over two projectile cannons is also meant to help enhance the suit's firepower and ease of production.

The beam cannon is operated alongside a multipurpose precision targeting system on the left shoulder for improved firing accuracy. The switch to a beam cannon also saved up space on the back meant for storing physical ammunitions, as well as vents for expelling the projectile cannons' exhaust gas. A new propulsion system with large thrusters is installed in this saved space, and coupled with the Guncannon II's reduced weight, the suit not only has improved thrust power in space but could also carry out short distance jumps while under gravity. This is a surprising level of mobility for a heavy mobile suit.

A pair of shell-firing armament built into the head. Low offensive power, only used to restrict enemy movement, and lay down a wall of suppressive fire due to their rapid-fire capability.

The Guncannon II can be equipped with the same beam rifle as used by the RX-77-2 Guncannon. This particular beam rifle is specialized for sniping. Compared to the beam rifle used by the RX-78-2 Gundam, it was harder to use but had higher accuracy and longer range. It is said to have a range of around 30km.

The standard armament for Federation's mobile suit ground forces during the One Year War that was developed by Yashima Heavy Industries. It has an alternate model number: "NF·GMG-Type.37/100mm". Equipped with a box magazine and folding stock, it has excellent rate of fire and is easy to wield. It utilized a smoothbore type barrel that lacked rifling and has to be replaced after firing 3000 rounds. The weapon could utilize three different types of ammunitions: HEAT (High Explosive Anti-Tank), APFSDS (Armor-Piercing Fin-Stabilized Discarding-Sabot), and HESH (High Explosive Squash Head), allowing combat units to select the appropriate type to meet operational needs. 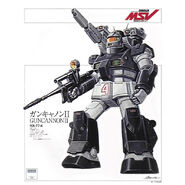 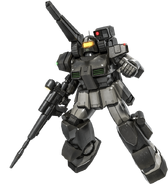 Guncannon II as seen in Side Story: Missing Link