To solve the recoil and balance issue completely, some test units later had their cannons replaced with a beam cannon. As the Guncannon Heavy Custom only received a limited production run, it was thus an uncommon machine. During the Gryps War years later, units stationed in Jaburo were outfitted with panoramic cockpit monitor, linear seat, a new color scheme and used the same beam rifle as the RMS-179 GM II.

Like the original Guncannon, the Guncannon Heavy Custom's main weapon is a pair of shoulder-mounted 240mm cannons. However, the Guncannon Heavy Custom's cannons have better offensive power due to a higher rate of fire and a better ammunition feed system. The recoil during firing has also been reduced, and although this issue is not completely eliminated, it does not cause much problem during practical use.

Instead of the shoulder mounted cannons, the Guncannon Heavy Custom can be fitted with the same beam cannon and targeting unit as the RX-77-4 Guncannon II.

The Guncannon Heavy Custom can use the same beam rifle as the RX-77-2 Guncannon. It is powered via an internal energy capacitor with an average charge of 15 rounds. The beam fired can tear through the armor of enemy MS and MA that haven't been treated with anti-beam coating. It is said to have an effective range of 30km.

The same weapon as used by RMS-179 GM II, it has a power rating of 1.9 MW and is powered by a rechargeable energy cap. This beam rifle was used by the Guncannon Heavy Customs stationed in Jaburo during the Gryps War.

During the early part of the Gryps War in UC 0087, at least one Guncannon Heavy Custom was known to have participated in the defense of the Earth Federation's Jaburo base. 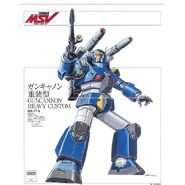