The Guncannon Heavy Type D can use the same beam rifle as the RX-77-2 Guncannon. This particular beam rifle is specialized for sniping. Compared to the beam rifle used by the RX-78-2 Gundam, it was harder to use but had higher accuracy and longer range. It is said to have a range of around 30km.

An optional MS-use Bazooka developed for the GM Series, it is also often used by the RX-77 series. Besides having enhanced accuracy due to the sensor mounted on top of the weapon, it is also lightweight, easy to use and has high shooting performance.

Mounted on the forearm, this is the same defensive armament as used by the Gundam Ground Types and GM Ground Types. However, the primary purpose for the Guncannon Heavy Type D equipping this shield is to help maintain its balance while jumping whenever it carries large weaponry, such as the Balzak Type 380mm Rocket Bazooka.

The Guncannon Heavy Type D has an unknown number of hand grenades stored in a rack on its left side armor. Various types of hand grenades can be stored, including one known as 'Cracker', which breaks up into several smaller explosives in midair, and is also used by Zeon's mobile suit.

The Guncannon Heavy Type D was first deployed in the late stages of the One Year War, and used by the Earth Federation Ground Forces on the African front [4]. One unit was also assigned to the penal battalion Slave Wraith, and painted in their team custom colors. 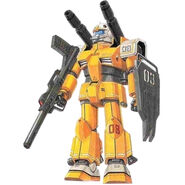