The RX-77-2 Guncannon was a mobile suit used by the Earth Federation Forces introduced in the TV anime Mobile Suit Gundam.

A middle-range support mobile suit developed simultaneously with the RX-78 Gundam and the RX-75 Guntank as part of Operation V, the Guncannon adopted the same Core Block System as the other two units.[1] Due to its role as an artillery support unit, the Guncannon's design prioritized durability over mobility, and it was not equipped with any melee weapons.[2] However, its armor was particularly heavy, capable of surviving a direct hit from a MS-09R Rick Dom's giant bazooka.[3]

Similar to the Guntank, the Guncannon's main weapons were a pair of shell-firing cannons, chosen for their reliability over beam weapons. These cannons could be optionally swapped out for a pair of spray missile launchers. Unlike the Guntank, however, the Guncannon's generator output allowed it to equip a beam rifle. It was also equipped with a pair of head-mounted vulcan guns and hand grenades for attacking enemy strongholds.[2]

Though its head design appeared to be simpler than the Gundam's head, the Guncannon's sensor system was in fact more complicated than the Gundam's due to its need to engage in artillery warfare.[4] This "twin eyes with goggles" sensor design was later inherited by the RGM-79 GM.[5] While the Guncannon's mobility was adversely affected by its weight, it was still comparable to that of the Zeon's MS-06 Zaku II. Furthermore, the backpack thrusters have sufficient thrust to enable jumping maneuvers under gravity for a short period of time.[6]

A pair of 240mm cannons are mounted on the shoulders for mid-range fire support. These low-recoil cannons are the Guncannon's main weapon and can fire around 40 shots.[3] As the cannons' barrels are fitted with water cooled jackets, their firing rate are comparable to those of the Zaku Machine Gun.[3]

A pair of 12-round missile launchers mounted on both shoulders in place of the 240mm cannons. Designed for launching a barrage in close range, they are current in the prototype stage, and it is unclear if they have been used in actual combat.

Made and developed by the BOWA corporation specifically for the Guncannon.[3] This particular beam rifle is classified as a XBR-L type despite its model number, and is specialized for sniping.[2] Compared to the XBR-M type beam rifle used by the Gundam, it was harder to use but had higher accuracy and longer range.[2] It was originally unusable due to issues with generator output, but this was resolved following modifications at Luna II.[3] It is said to have a range of around 30km.[3]

A hand grenade is stored in a secured hatch on the lower part of each leg. Once the grenade is removed from storage, it is already armed. There is a five to seven-second fuse, allowing enough time for the Guncannon to throw the grenade safely away.

The prototype mobile suits produced by the Earth Federation Forces' Operation V, are equipped with a central block which houses the mobile suit's cockpit, control systems, and main power source. This core block can eject in case of emergency and unfold into a small Core Fighter.

During the Zeon attack on Side 7, only one RX-77-2 Guncannon survived the attack. It was stationed aboard the Pegasus-Class assault carrier White Base and piloted by Kai Shiden. However, when the White Base made its way to Jaburo, another unit was transferred to the White Base to replace the Guntank. It was piloted by Hayato Kobayashi. To separate the two units, they were named the "C-108" and "C-109". Both units were heavily damaged at the last battle of the One Year War at the Zeon's space fortress A Baoa Qu. A third unit, codenamed "203",[7] also participated in the battle, though its ultimate fate was unknown. Kai's Guncannon later reappears in Hayato's mobile suit museum in Mobile Suit Zeta Gundam.

The RX-77-2 Guncannon was the only "V Project" mobile suit to ever be produced in limited numbers. It served as a main mobile suit until the Federation introduced the RGM-79 GM; however, due to the high cost of beam weapons, many Guncannon units were armed with conventional machine guns or rifles. Some unlucky pilots were not issued a hand weapon at all, and had to rely on the Guncannon's built-in armaments. In the Mobile Suit Gundam: Zeonic Front video game, a three-man Guncannon squad was commanded by young, brash Federation pilot, Lieutenant Agar (who would later become pilot of the RX-78-6 Mudrock Gundam). This team would pursue the infamous "Midnight Fenrir Corps" Zeon special forces mobile suit team up to the Battle of Jaburo. Also in Mobile Suit Gundam: Cross Dimension 0079 video game, at least two Guncannons was used by the Albatross transportation team in the Gobi Desert, though game's dialogue said they already lost several of them. Three units were also assigned to the SCVA-72 Thoroughbred. 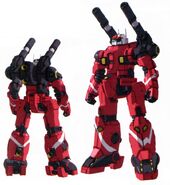 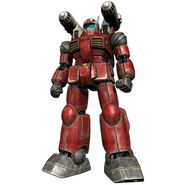 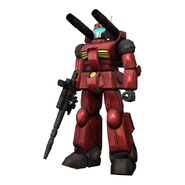 In Mobile Suit Gundam: Bonds of the Battlefield 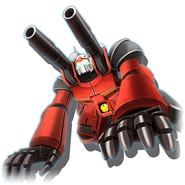 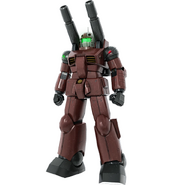 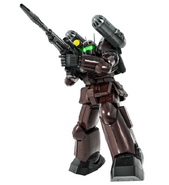 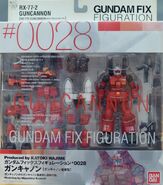 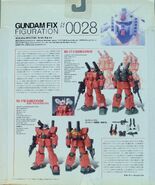 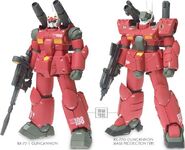 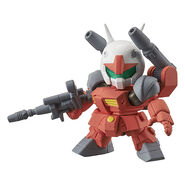 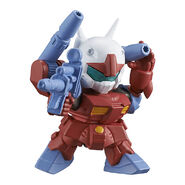