The RX-75 Guntank Mass Production Type is a mass-produced artillery mobile suit, it is an attempt to mass-produce the famous RX-75-4 Guntank serving on board the White Base. The unit is featured in the anime series Mobile Suit Gundam: The 08th MS Team.

A mass-production model of Guntank was produced later in the war, designated RX-75 Guntank Mass Production Type. The mass production type lost the Core Block system to cut costs; which allowed this new model to also swivel its upper torso, increasing combat effectiveness. It was also constructed using Titanium Alloy, which was much cheaper and much more fitting of a mass productio unit, but not as effective as the Luna Titanium Alloy of the original Guntank. The original Guntank's 180mm cannons were replaced with smaller but equally as effective 120mm cannons; these cannons could be removed and replaced with other appendages. An autoloading system was installed in its backpack, which could unfold to utilize this autoloading system, as well as stabilize the suit during firing. Some mass-produced Guntanks were turned into RX-75 Berge Guntanks and equipped with a forward bulldozer mounted on the front glacis plate as well as a crane for recovery work. Since these Berge Guntanks still had the RX-75 model number, it can easily be presumed that this was a battlefield improvisation and not an official factory variant of the mass produced Guntank.

The primary weapons of the RX-75 Guntank Mass Production Type are a pair of 120mm cannons based upon the cannons used by the RX-75-4 Guntank. The cannons are fire-linked and mounted on the backpack, which contains an auto-loading system for continuous firing.

For mid-range combat the mass production Guntank is equipped with a pair of 40mm 4-barrel Bop Missile Launchers mounted in place of standard mobile suit forearms.

The RX-75 Guntank Mass Production Type was introduced in the final months of the war as a heavy artillery base assault and fire-support unit. Production of the mass production Guntank was limited with only a handful of units serving in the Earth Federation army throughout Earth, mainly in base defense or long range artillery support. One notable action that the Mass Production Guntank saw was with the Kojima Battalion in South-East Asia where three units were used to bombard Zeon's mountain fortress, preventing any attempts at mass-escape through the use of a shuttle. These units were targeted by Norris Packard in his MS-07B-3 Gouf Custom, successfully destroying all three units despite the effort of the 08th MS Team to stop him. Without the Guntanks providing heavy artillery fire-support the Zeon forces were able to safely launch their Apsalus III mobile armor.

After the war production of the RX-75 Guntank Mass Production Type was halted in favor of the newly designed RMV-1 Guntank II that was more heavily armed and had better firing arcs for its cannons. The Guntank Mass Production Type would continue service in U.C. 0081, where they would be used for defense of Federation bases or operations against Zeon remnants. It is unknown if they served any longer than that, however.

Being guarded by Gundam Ez8 (08MST) 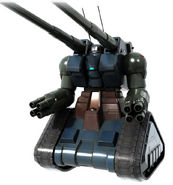