The RX-75 Guntank is a tank/mobile suit featured in Mobile Suit Gundam: The Origin manga.

They were older mass-produced machines, and were already in use when the White Base arrived at Side 7 [1].

After Gene spotted a wrecked RX-77 Guncannon suspected to have been destroyed by a "heat-ray" weapon, Denim also saw a wrecked RX-75 that was believed to have been used as a mock target. They saw how the left large-caliber cannon of the Guntank look liked it was sheared off by an intense heat ray and deduced that the Earth Federation had a "new armament" as they were not aware of any Zeon beam rifles with such firepower at that point in time [2]. 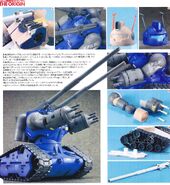