The RX-178B Build Gundam Mk-II is a Gunpla from the anime series Gundam Build Fighters and a variant of the RX-178 Gundam Mk-II. It is built by Sei Iori as a backup unit, and is piloted by Reiji, and later by Sei himself.

Based on the Gundam Mk-II that appeared in Mobile Suit Zeta Gundam and Mobile Suit Gundam ZZ, Sei takes into account the settings of the anime when designing the Build Gundam Mk-II. Its main armament are two new beam rifles, dubbed "Beam Rifle Mk-II", two beam sabers, and two movable shields, and can be optionally equipped with a hyper bazooka, a vulcan pod and MK-II's standard shield and beam rifle. The suit also has improved sensor systems and is equipped with the Build Booster Mk-II support unit on the back that can operate as an independent fighter when separated.[1] The Gundam Mk-II is chosen as the base model as Sei considers its ability to dock with G-Defenser to be similar to Build Strike's ability to dock with the Build Booster.

The Build Gundam Mk-II's primary weapon, they are high output beam rifles that are mounted to the movable shields, but they can also detach and be used as handheld weapons. When attached to the shields, the pair of rifles are directly linked to the suit's generator and hence capable of powerful beam shots. When used as a handheld weapon, the rifles can only fire limited number of shots due to their heavy energy consumption. The Beam Rifle MK-IIs can fire beam shots individually or in a beam machine gun-like burst.

Each rifle can also generate a beam blade from its emitter for close combat when mounted on the movable shield.

The Build Gundam Mk-II possesses two beam sabers as its primary close combat weapon. When not in use, the beam sabers are stored on a pair of racks on its backpack, identical to the original Gundam Mk-II.

The Build Gundam Mk-II's optional ranged beam weapon, it is the same handheld beam rifle used by the Gundam Mk-II.

A powerful handheld bazooka, identical to that used by the Gundam Mk-II

Just like the Gundam Mk-II, the Build Gundam Mk-II lacks head-mounted vulcan guns, but it can equip this optional vulcan pod on its head. The vulcan guns are housed in the left side with two barrels, while the right side functions as a balancer and contains the magazine.

The Build Gundam Mk-II can also carry the standard solid shield used by the Gundam MK-II.

The detachable support unit concept utilized by the GAT-X105B/FP Build Strike Gundam Full Package proved to be very effective in Gunpla Battle, and the Build Booster MK-II is an enhanced version of this concept. The Build Booster MK-II is armed with a pair of Beam Rifle Mk-II as well as two Movable Shields, and they are mounted on rotatable joints. These weapons can either remain on the unit or be transferred to Build Gundam Mk-II's arms when the Build Booster Mk-II docks with the suit. Either way, the Beam Rifle MK-IIs have a wider attack range than the Build Booster's large beam cannons. Sei used the ORX-005 Gaplant as a reference when designing this feature. The front portion of the Build Booster Mk-II is not present when it is attached to the suit; after detaching from the suit, the front section (also known as the cockpit block) will dock with it to allow independent operation.

For the history of the Build Gundam Mk-II, go to Sei Iori and Reiji's pages.

According to the fictional background given by Sei, the Build Gundam Mk-II is the Gundam Mk-II Unit 5 that doesn't appear in the official story. It was developed by the Titans as a superior counterpart to the Super Gundam but was later stolen by the AEUG.

Sei Iori, sketching out what appears to be a design for the Build Booster Mk-II 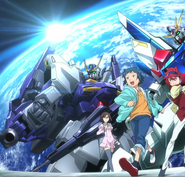 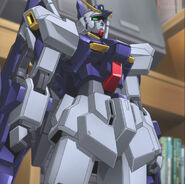 Retrieved from "https://gundam.fandom.com/wiki/RX-178B_Build_Gundam_Mk-II?oldid=470781"
Community content is available under CC-BY-SA unless otherwise noted.