The RX-178-X0 Prototype Gundam Mk-II was an experimental Gundam-type mobile suit constructed by the Titans and was the prototype of the famous RX-178 Gundam Mk-II. It appears as a playable unit in the Gihren's Greed strategy game and is mainly piloted by Cyber Newtype Zero Murasame.

Conscious that the RX-78 series left much to be desired as a general purpose mobile suit, the Titans initiated the creation of the Prototype Gundam Mark II and underwent accelerated development. As a trial unit, it was distinguished by the pursuit of performance over cost, and thanks to its specifications, it was regarded as an immensely powerful unit. The evaluation unit introduced several new technologies including the "movable frame" construction concept and incorporating a 360-degree "panoramic monitor" from the Gundam Development Project (it is suspected that Anaheim Electronics was involved in the development of this machine), and aside from its reinforced armor, it was believed that its combat potential was more than a match for second-generation mobile suits which were used in the Gryps Conflict. Its main armament was fairly standard, being equipped with two beam sabers for melee combat, a shield for defense and an experimental beam rifle whose output rivalled that of a Magellan-class battleship's main cannon.

The beam saber produces high-energy Minovsky particles to form a blade-shaped I-field filled with superheated plasma that creates a deadly cutting blade. The RX-178-X0 is equipped with two beam sabers stored on the backpack when not in use. These are prototypes that would later be further developed and added to the RX-178 Gundam Mk-II when it was constructed.

An extremely powerful prototype beam weapon, although its initial output was high, the beam rifle's accuracy was poor, and a limiter that could constrain the output and a selector that could change the power according to the combat situation were later developed and added to the RX-178 Gundam Mk-II when it was constructed.

A basic arm-mounted defense armament for many mobile suits. The RX-178-X0 uses a shield similar to the one used by the Gundam "Zephyranthes".

The same beam rifle as used by Gundam "Zephyranthes", power rated at 1.5 MW. It is powered by replaceable e-pacs.

Mounted on the underside of the beam rifle, it is a small beam saber designed to catch enemy beam sabers. It allows the pilot to quickly counter when there is no time to draw out his main beam saber.

This machine possessed in abundance all three attributes for such combat: heavy armor, powerful armament and an efficient power output, although mechanical reasons for the initial unreliability of the RX-178-X0 like its extremely short operating time and being somewhat tricky to pilot made it only suitable for only the most experienced pilots (of note was Zero Murasame, an enhanced human from the Murasame Newtype Research Institute). This unit was also an extraordinarily expensive machine to produce, comparable to that of constructing a few Pegasus-class warships. As a result of continuing handling difficulties, the RX-178-X0's development was halted and design effort was concentrated to the refined RX-178 Gundam Mk-II. 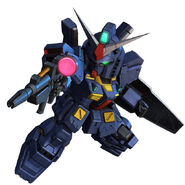 Retrieved from "https://gundam.fandom.com/wiki/RX-178-X0_Prototype_Gundam_Mk-II?oldid=466286"
Community content is available under CC-BY-SA unless otherwise noted.