The RX-160 Byarlant is a prototype high-mobility mobile suit from the anime series Mobile Suit Zeta Gundam. It is piloted by Jerid Messa.

In order for the Titans to firmly establish aerial superiority over the Earth, the Byarlant was designed to possess self-sustained atmospheric flight without the use of an external support system such as the Base Jabber, or a complicated and costly transformation system that was the trend at that time. It was also designed to intercept, at high altitudes, enemy units descending from outside the atmosphere.

The Byarlant's flight capabilities were achieved through the incorporation of powerful thermonuclear jet thrusters in its shoulders and waist. By replacing the jet thrusters with rocket thrusters, the Byarlant can be used in space. Due to prioritization of the flight systems, its offensive systems were lacking, and the unique design of its hands meant that the Byarlant could not wield mass-produced weapons employed by other mobile suits, limiting it to its own pair of beam sabers and the mega particle cannons mounted in its hands.

A fixed armament mounted on Byarlant's palms, the pair of mega particle cannons are the suit's sole range weapons. They are capable of rapid-fire and have a power output of 4.7 MW each.

For close-combat, the Byarlant has a pair of beam sabers stored in the inner part of the elbow, which can be pulled out during battle. The beam sabers' handles have a unique triangular cross-section to match the mobile suit's clawed hands.

The Byarlant was an experimental mobile suit designed by the Titans during the Gryps Conflict in U.C. 0087. Jerid seized the incomplete Byarlant as his new personal mobile suit during the skirmish at Mount Kilimanjaro. He used the Byarlant to battle members of the AEUG, specifically his rival, the AEUG's Gundam pilot Kamille Bidan. Despite its impressive performance, the Byarlant was defeated and Jerid moved on to other more powerful machines. Later, three additional Byarlant units accompanied Reccoa Londe during Scirocco's coup against Bask Om. 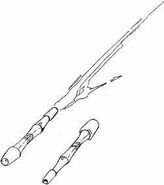 Palace Athene with three Byarlants about to kill Bask. 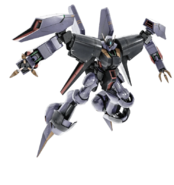