The RX-160S Byarlant Custom is a variant of the RX-160 Byarlant introduced in the Novel/OVA series Mobile Suit Gundam Unicorn. It is piloted by Robin Diez.

The RX-160S Byarlant Custom is a technology testbed created by upgrading the surviving units of the RX-160 Byarlant, which was developed by the Titans during the Gryps War. Its thrusters have been enhanced, and a pair of back-mounted propellant tank/thruster units added, to extend the time for which it can fly independently in the atmosphere. Its main weapons were also improved[1], with other changes to the suit including arm parts taken from RX-110 Gabthley, a new feet design derived from the NRX-055 Baund Doc and the replacement of the mono-eye sensor with an EFF standard visor-type sensor. The Federation Forces HQ specifically requested the change in sensor before they would approve the project.[1]

Development staff have referred to this project as a composite "creature" (Chimera) of Titans mobile suits. Although the Bylarant Custom did not incorporate the latest technology, it still achieved improvement in overall performance over the original.[1] Two Byarlant Custom units were produced at Torrington Base in total, with Unit 1 being a validation unit for the enhanced thrusters and various modifications. Unit 2 was intended to be the completed version after undergoing further modifications.

A fixed armament mounted on the forearms, they are the suit's only range weapon and are power rated at 4.7 MW. By adjusting the relevant parameters/settings of the particle cannons, such as its output, the weapon can have a variety of firing modes, including a beam machine gun-like mode that have a high rate of fire at the expense of penetrating power.

Unlike the original Byarlant, the Byarlant Custom's beam sabers are generated from the Mega Particle Cannons.

While the original Byarlant has small claws for manipulators, the Byarlant Custom is equipped with two claw arms from Gabthley for improved melee combat capability. However, they are even more unsuitable for wielding weapons.

The propellant tank/thruster unit is a combination of large fuel tank with rocket-propelled thruster units attached at the end. It provides additional fuel for longer deployment times and greatly enhances Byarlant Custom's acceleration and agility during aerial combats. A pair are equipped on both sides of Byarlant Custom's built-in back thrusters.

The Byarlant Custom was deployed against the Zeon remnants during the assault of Torrington Base. Although Unit 1 was launched during the attack, the Unit 2, which had yet to undergo further modifications, was grounded due to an error soon after activation. Unit 1 destroyed multiple Zeon remnant mobile suits, including two AMS-129M Zee Zulus, and pushed back the Zeon remnant forces with the help of Londo Bell's Tri-Stars mobile suit team and other Earth Federation forces.

Close up of visor-type sensor

Close up of shoulder thrusters

Chopping off a Zee Zulu's arm with Beam Saber 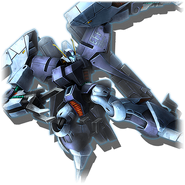 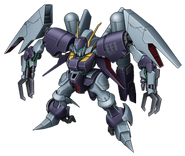 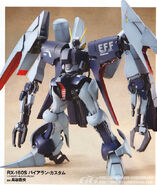