During the Gryps Conflict, the Earth Federation Forces and the Titans developed several experimental transformable mobile suits/mobile armors and conducted field tests by placing them into actual combat. One of the more well-known designs was the RX-139 Hambrabi, and it was unique in several respects. Developed with the help of Paptimus Scirocco, the Hambrabi featured a simplified transformation system to make it more suitable for mass production.

One of the most visibly unique features were the five mono-eye sensors placed all over its body, enabling the pilot to more easily locate and track targets in both mobile suit and mobile armor modes. Although its generator and thruster output were nothing special, the Hambrabi could engage in high-speed combat for a longer period due to more efficient combustion of its propellant. It was also very maneuverable, and one of the few transforming mobile suits to retain its close combat capabilities even in mobile armor mode, allowing it to use its handheld weapons and forearm-mounted claws regardless of its form.

Besides the forearm-mounted claws, the Hambrabi was also armed with a pair of beam rifles, a pair of beam sabers, a tail lance, and can use the RX-110 Gabthley's Fedayeen rifle, as well as the "sea serpent," a wired grappling weapon used to deliver crippling electrical shocks to enemy mobile suits. Despite having excellent production costs and ease of maintenance, only a few Hambrabi units were built as it was discovered that to utilize the machine effectively, its pilot must be highly skilled and have a unique 'combat sense'.

The standard close range armament for most mobile suits, it is a small device held in the mobile suit's hands when operated and is powered by a rechargeable energy capacitor. The beam saber emits a blade of plasma contained by an I-Field and can cut through most armor not treated with anti-beam coating. Power rated at 0.5 MW, one beam saber is stored on each of Hambrabi's forearms, and they can function as beam guns when stored. One can be used as a reserve weapon, or both can be used simultaneously in a twin sword fashion.

Mounted on the Hambrabi's back are a pair of beam rifles, which although vertical by default, can be trained 90 degrees lower in both mobile suit and mobile armor modes. These beam rifles have a power rating of 2.6 MW each.

Functioning as a stabilizer in the mobile armor mode, Hambrabi's "tail" can be used to pierce an enemy unit when used in mobile suit mode.

A long and powerful beam rifle used by Hambrabi and RX-110 Gabthley, power rated at 6.6 MW, charged by rechargeable energy cap. It can function as a beam saber, similar to MSZ-006 Zeta Gundam's (BOWA) XBR-M87A2 Beam Rifle. It could be stored on the main body during mobile armor mode.

A handheld, wired grappling weapon that can be used to deliver crippling electrical shocks to enemy mobile suits. Its tip contains verniers that helped in controlling its trajectory. Can be used in unison with other sea serpents to form a net known as 'Spider Web'.

Sometime after Operation Apollo, the Titans began utilizing the RX-139 Hambrabi. Like the RX-110 Gabthley, Paptimus Scirocco was involved in its design. Three prototype units were assigned to Yazan Gable, Dunkel Cooper, and Ramsus Hasa, forming the "Hambrabi Team." Yazan and his wingmen used the Hambrabi to battle the AEUG on multiple occasions, including the AEUG's assault on Kilimanjaro, during which Yazan captured AEUG pilot Reccoa Londe after she abandoned her MSA-005 Methuss.

During the Battle of Gryps, the Hambrabi Team was dispatched and Ramsus was soon killed by Katz Kobayashi's FXA-05D G-Defenser. In response, Yazan and his Hambrabi destroyed the G-Defenser after it crashed into a meteorite, killing Katz (in New Translation, the G-Defenser was destroyed when it crashed on the meteorite instead). Enraged by this, Emma Sheen used the RX-178+FXA-05D Super Gundam to destroy Dunkel's unit. Yazan then took advantage of Emma's emotional state to sneak behind her and destroy the Super Gundam's equipment, leaving her with only the base RX-178 Gundam Mk-II. When Henken Bekkener attempted to reinforce Emma with the Radish, Yazan utilized the Hambrabi's speed to evade the ship's fire and attacked its bridge, killing Henken and the bridge crew.

Yazan later worked with Reccoa Londe's PMX-001 Palace Athene in the final stages of the Battle of Gryps against Kamille Bidan's MSZ-006 Zeta Gundam and Emma's Mk-II. During the battle, Yazan's Hambrabi destroyed the defeated Palace Athene, mortally wounding Emma who had left her Mk-II to check on whether Reccoa had died. Yazan's Hambrabi was then confronted by Kamille, who was greatly angered at the deaths of his friends at Yazan's hands. Using the Hambrabi's speed, Yazan fired several shots at Kamille's Zeta, but these attacks were futile due to the effects of Zeta's biosensor. Yazan then attempted to flee, but his Hambrabi was quickly sliced apart by the Zeta's beam saber. However, Yazan managed to eject his cockpit in time and escaped.

Charging with a Beam Saber

Armed with a Sea Serpent 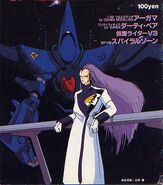 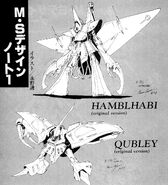 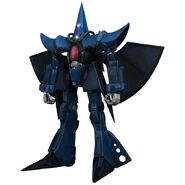 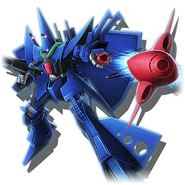 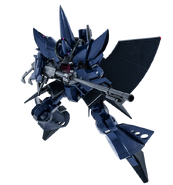