The RX-124 Gundam TR-6 [Kehaar II] appears in the photo novel Advance of Zeta: The Flag of Titans.

The RX-124 TR-6 [Kehaar II] is a configuration of the RX-124 Gundam TR-6 [Woundwort] mobile suit which featured various enhancement parts to the overall frame and attitude control binders attached to its chest. The shoulder units were fitted with nuclear thermal jet engines and spread beam guns, which also served as defensive equipment to protect the base mobile suit. In mobile suit form, part of the shoulder unit can be detached as a shield, and the attitude control binders join to cover the chest and sub arm unit. The TR-6 had legs which feature very unconventional feet. The walking ability of the legs was very limited, but the TR-6 was designed to hover during ground based combat.

The mobile armor form featured a disc-like shape closely resembling the NRX-044 Asshimar. This shape demonstrated improved aerodynamic characteristics during atmospheric flight, although it can also function in space. In this form, the sub arm can be deployed from the underside of the machine to hold a beam rifle or other weapons. The Kehaar II can be also fitted with a sensor radome for early warning. The sensor radome is installed in place of the booster pod, and the Kehaar II's search capabilities are significantly increased. It was developed as an escort machine for the decisive weapon RX-124 Gundam TR-6 [Inle]. 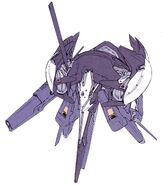 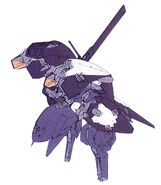 Retrieved from "https://gundam.fandom.com/wiki/RX-124_Gundam_TR-6_%EF%BC%BBKehaar_II%EF%BC%BD?oldid=440304"
Community content is available under CC-BY-SA unless otherwise noted.