The RX-124 Gundam TR-6 [Inle] is a variable mobile armor featured in the photo novel Advance of Zeta: The Flag of Titans. The Inle is a combination of multiple TR-6 forms, the Dandelion II form and the Fiver II form of the RX-124 Gundam TR-6 (Woundwort). The Inle was illustrated and designed by Kenki Fujioka.

The Inle could assume a cruising form by reconfiguring its composite defensive binders for long range missions, bringing its length to nearly 100 meters. The Inle can also be configured into a launching form when equipped with six RX-124 Gundam TR-6 Kehaar II units as combat support machines, in which the expanded binders act as linear launch catapults. The Inle was armed with the gigantic Bigwig Cannon II which was fitted on the Fiver II, A pair of diffuse beam cannons which contributed to the Inle's immense firepower, and two I-field generators which gave the Inle sufficient defense against beam weapons. The large "head" section can open up to accommodate weapon cargo units of various sizes in similar fashion to the Dendrobium Orchis.

A Daedalus unit Minovsky craft system was mounted to allow for atmospheric flight. The Inle can be equipped with a large high-output booster to provide liftoff thrust and propelling the Inle into low-Earth orbit. A proposed idea for the Inle was for the unit to be fitted with a large booster equipped with three giant solar sails, which was intended for interplanetary travel.

A hyper long-range beam cannon, which was a further enhancement of the high-output long-range beam cannon tested with the YRMS-106+BL-85X Bizack TR-2 (Bigwig). This cannon has increased power and higher accuracy for precision firing, and is nicknamed the Bigwig Cannon II. Although it boasts greater firing range than the main gun of a warship, its long barrel becomes a hindrance in close combat, and it could be considered a weapon specialized for preemptive strikes.

A remote weapon designed for use with the quasi-psycommu system system. These disc-shaped devices are armed with internal beam guns and controlled via wire cables. Every time an INCOM changes its flight direction, it deploys a tiny relay INCOM to hold the wire in place and maintain its connection to its parent mobile suit.

Also known as a "scattering beam cannon", this a mega particle cannon with a beam-deflecting device fitted within the barrel and allows it to "spread" multiple beams of energy across a wide arc. Because the beam is defocused and dispersed, the diffuse beam cannon is less powerful than a standard mega particle cannon. Because they cover a wide area, the diffuse beam cannons give the pilot more options in setting up a tight defense around the MS to protect it from projectiles and attacks from behind.

A specialized device that was first used on the "Stutzer" series of mobile suits. The Titans Test Team later adapted the technology on their own machines. It consists of a detachable wire-connected device which can be remote-controlled to attack enemy mobile suits.

A protective device which uses a powerful I-field to deflect enemy mega particle beams. When the generator is activated, the I-field forms an invisible barrier around the mobile weapon, protecting it from incoming beam attacks. However, this barrier has no effect against solid objects like missiles and projectiles, and beam weapons can still be used at point blank range within the barrier's boundary.

Advance of Zeta: The Flag of Titans

The Inle's capabilities were enough for a single unit to greatly influence the battle situation, and during the last stages of the Gryps Conflict, specifically the Colony Laser battle, orders were given to deploy the “Inle” in combat. However, when Captain Petersen ordered Eliard Hunter to destroy the TR-6 Woundwort, Eliard launched in the Woundwort and escaped without the “Inle” units. With the exception of the “Fiver II” that was attached to the “Hazel,” most of the “Inle” units that were not installed on the TR-6 were destroyed along with the Alexandria-class Aswan.

It was completed by ReZeon as a defense weapon for Mars. Its pilot was to be selected from the Alice Guards Newtype squad. 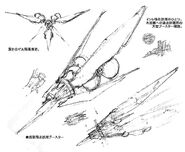 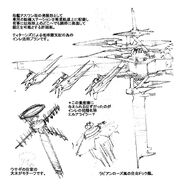 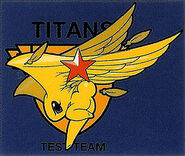 Retrieved from "https://gundam.fandom.com/wiki/RX-124_Gundam_TR-6_%EF%BC%BBInle%EF%BC%BD?oldid=311818"
Community content is available under CC-BY-SA unless otherwise noted.