The RX-124 Gundam TR-6 [Haze'n-thley II-Rah] (also known as the Gundam TR-6 [Advanced Woundwort Ex]) is a transformable mobile suit that appears in the novel Advance of Zeta: The Flag of Titans.

A configuration of the RX-124 Gundam TR-6 [Haze'n-thley II] equipped with a FF-X29A G-Parts [Hrududu II] unit to form a superior version of the high-speed fighter form. With the addition of the Hrdudu II it becomes a machine in the same area dominance category as the ORX-005 Gaplant TR-5 [Hrairoo]. This form includes most of the parts of the Hrdudu II, including two open barrel beam cannons connected to multi arm units and a double shield type booster pod which is attached to its waist on top of the sub arm unit. The Primrose II cockpit capsule is omitted, along with the extra drum frame and sub arm unit.

This weapon fires a focused beam of massive, high-velocity mega-particles, which cannot be deflected by magnetic fields and tears through any conventional armor material. The output power of the mega-particle cannon is 4 times greater than conventional laser weapons at the time and is considered to be more efficient due to most units having semi-transparent coatings on top of their armor which renders Laser weapons virtually useless unless having a laser device at least as big as a mobile suit, excluding the generator.

a multi-functional shield that can be used as both a long beam rifle and a claw for melee combat. it also includes a targeting sensor and an I-field generator, and can function as a winch unit. The winch unit can operate as a wired bit.

The most unique weapon of the Haze'n-thley which is first used by the RX-124 Gundam TR-6 [Woundwort]. As the long blade rifle is used as a regular beam rifle, it also doubles as a shield to protect itself from enemies. It can also produce a heat blade, allowing it to cut down enemies. The Long Blade Rifle can also transform into a miniature MS an can be used an an INCOM. Like all Beam Rifles of the period, the Long Blade Rifle is powered a a replaceable E-Pac. 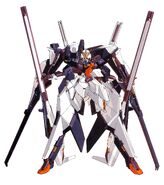 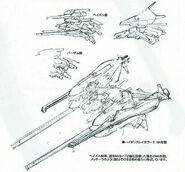 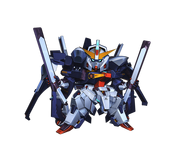 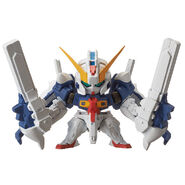