The RX-124 Gundam TR-6 ［Woundwort］ can be configured to adapt to a variety of mission scenarios by attaching option parts to the basic frame. An example is the high-speed fighter form which duplicates the mechanical characteristics of the RX-110 Gabthley [1], which was considered to have the best overall balance of all the transformable mobile suits developed by the Titans. It is intended specifically for space combat, and its flexible capabilities allow it to be adapted to various missions.

It features a large moveable tail binder (rear skirt) equipped with a built-in generator that is connected to the waist frame[1]. The structure reflects data obtained from experiments with the wing booster of the RX-121-1+FF-X29A Gundam TR-1 [Hazel-Rah] Second Form[1]. The position of the skirt armor changes depending on the situation[1]. The skirt is arranged vertically on the sides of the waist during cruising and MS mode. During Intermediate Form and MA mode, in which the legs transform into claws, the skirt rotates 90 degrees and moves to the rear[1]. The RX-78GP03S Gundam "Dendrobium Stamen" is known to use a similar system[1].

The distinctive legs of the Haze'n-thley II are elongated due to the transformation system that allows the entire leg to transform into a large claw during MA mode or Intermediate Form [1]. The sole and toe sections are skid-like in appearance and retain only the minimum functions required for the legs of the MS [1]. Despite their unique appearance, the legs play an important role during landing [1]. When landing on a surface with increased load, the front and rear sections of the legs can split, deploying the rear section like a heel to stabilize the MS [1]. The heel also functions as a hover unit and is deployed during hovering [1]. The knees function as weapon bays and are equipped with beam weapons and missile launchers that are deployed during the claw transformation [1].

Because the mobile armor form was not designed to operate in the atmosphere(exosphere), its overall shape resembles a traditional mobile armor. This form is the result of striving for a mobile armor best suited to high-speed combat in space. The upper and lower body components of this mobile armor form can separate into a top fighter and bottom fighter, giving it the flexible functionality to match any combat situation.

Mounted within the booster pod. The booster pod is located on the back skirt of the mobile suit mode and is thus ineffective in that form. However when transformed in “Bottom Fighter” mode, the booster pod faces forward and functions as the “nose” of the machine, allowing the Vulcans within to be used to fire physical rounds at targets, functioning as a defense against missile weaponry, and when in a pinch can be used to destroy mobile suit sensors.

A pair of beam cannons are mounted over the suit’s shoulders. The same type of weapon used on standard warships, 4 times the output of conventional beam weaponry. They cannot be blocked by standard shields or armor.

A weapon used primarily for defense, a small amount of missiles are stored within the legs for use in the suit’s transformed “Bottom Fighter” and Mobile Armor form.

A single mega particle cannon is located under a flap on the mobile suit’s backpack, and is pointing upwards, thus in mobile suit mode it is ineffective. However in its transformed Top Fighter and Mobile Armor modes, this backpack functions as the “nose” of the machine, and the mega particle cannon faces forward, and is useable. The same type of weapon used on standard warships, 4 times the output of conventional mobile suit beam weaponry. They cannot be blocked by standard shields or armor. This weapon functions identically to the weapon of the same name within the waist of the Sazabi, destroying suits in close to mid range.

An upgraded version of the same technology used on the TR-6 Woundwort. This Booster Pod allows the Hyzenthlay to perform atmospheric entry, despite being a suit designed for space.

The main armament of the Hyzenthlay. A multi-functional shield that can be used as both a long beam rifle and a claw or heat sword for melee combat. It also includes a targeting sensor and an I-field Generator, and can function as a winch unit. The winch unit can operate as a Mobile Bit.

An I-Field Generator attached to the Composite Shield Booster. It is capable of bending any beam, and thus defends against beam weapons.

A mobile weapon can be created through a series of weapon modules, which includes a Core module for the pilot (normally a small fighter craft). While the pilot operates the Core module, they can coordinate the modules into combining into the desired mobile weapon, with the Core module at its base. In the case of Hyzenthlay, it is able to separate and transform into two intermediate forms, a top fighter and bottom fighter. These intermediate forms can combine into one transformed Mobile Armor mode.

The Haze'n-thley II was the high-speed combat form of the TR-6［Wondwart］ and meant to be the mainstay machine of the Titans [2]. The Haze'n-thley II was developed as a counter to the AEUG's Z Plan and its successors (such as the MSZ-010 ΖΖ Gundam) and given abilities to overcome them[2][1]. It was operated by the Titans Test Team and contributed to the end of the Gryps War[1]. It was later captured from Titans remnants by ReZeon and modified into ARZ-124HZII [Hyze'n-thley II]. 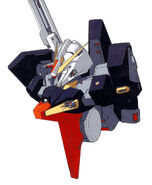 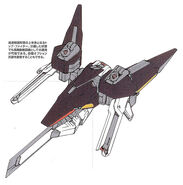 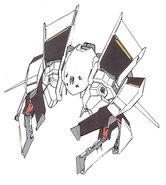 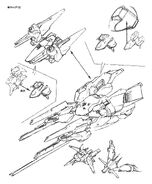 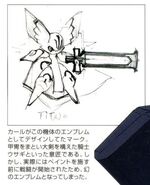 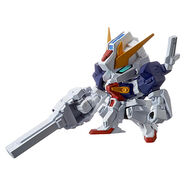 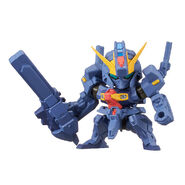