The RX-124 Gundam TR-6 [Gaplant II] is a variant of the TR-6 [Woundwort] series produced by the Titans Test Team. It appears in the Advance of Zeta: The Flag of Titans novel.

An armament form of the TR-6 which uses ORX-005 Gaplant TR-5 parts for its arms and movable shield binders, and Hazel parts for its lower legs. This form is used for parts evaluation testing and has no specialized capabilities, but it demonstrates undeniable fighting strength. This configuration of the TR-6 Woundwort is also equipped with a double shield type booster pod, two shield boosters, and the same Fedayeen Rifle used by the RX-110 Gabthley.

The combination between a normal MS's shield and a Sturm Booster. They are basically a shield, which is a thick sheet of armor designed to take severe punishment that would normally destroy a mobile suit. But the shield booster also contains propellant tanks and a single thruster for increasing propulsion purposes. Unlike Sturm Booster, which became dead weight when the fuel is used up, the shield booster can still be kept for defensive purposes.

A long and powerful beam rifle used by Gabthley and the Hambrabi, power rated at 6.6 MW, and charged by rechargeable energy cap. It can also function as a beam saber, similar to the MSZ-006 Zeta Gundam's (BOWA) XBR-M87A2 Beam Rifle. 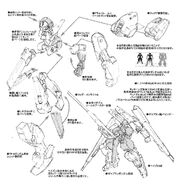 Retrieved from "https://gundam.fandom.com/wiki/RX-124_Gundam_TR-6_［Gaplant_II］?oldid=496718"
Community content is available under CC-BY-SA unless otherwise noted.