The RX-121 Gundam TR-1 [Hazel] is a Mobile Suit from the Gundam Universal Century time-line. It was featured in the photo-novel and manga Advance of Zeta: The Flag of Titans.

The RX-121 Gundam TR-1 [Hazel] is a functional test machine assigned to the Murphy team, based upon the GM Quel. It was equipped with a Gundam head in order to test its psychological effectiveness against Zeon remnants, though it was actually modified from an existing GM-Quel head instead of a true RX-type Gundam head. As it is developed for use in real combat, as well as used as test machine, many of its parts have been replaced with enhancement parts like the new backpack, the movable booster pod attached to it, and the improved thrusters in its legs. As a result, its potential rivals that of a Gundam.

Its beam rifle is a prototype version of the energy pack type which the next generation of machines are expected to carry, and this machine has also been used in the development and testing of other devices such as the shield booster. Also, the support actuator units on the Hazel's shoulders can be fitted with either multipurpose launchers or holding grips to help stabilize its arms while in High Mobility Form. Its skirt armor is usually fitted with energy pack holders which store two energy packs apiece.

The Hazel's most distinctive equipment is the shield booster, which contains propellant tanks and a single thruster with an output of 22,000 kg. This device is a further evolution of the sturm boosters used by earlier mobile suits, but unlike its ancestors the shield booster is retained as a shield after its propellant supply is exhausted, rather than being discarded when empty. The Hazel's Assault Form is equipped with two shield boosters, one on each arm, and its High Mobility Form also carries one on its movable booster pod.

A standard armament of the Earth Federation Forces's Mobile Suits is a pair of head mounted 60mm vulcan guns. These shell firing weapons have a high-rate of fire but little power. Because of their low caliber, they won't cause much damage to a mobile suit, but they are useful for keeping an enemy mobile suit from getting too close. They are also ideal for shooting down small, lightly armored targets such as missiles, attack vehicles, etc.

The standard close combat armament for Earth Federation mobile suits, it is a small cylindrical device held in the mobile suit's hands when operated and is powered by a rechargeable energy capacitor. The beam saber emits a blade of plasma contained by an I-field and is capable of cutting through any metal alloy. The RX-121 Gundam TR-1 [Hazel] stores one in the right side of the backpack.

Gundam TR-1 [Hazel] can be equipped with a XBR-M84a Beam Rifle. The particle beam fired from a beam rifle can penetrate almost any armor that has not been treated with specific counter-measures. Unlike most beam weapons of the period, which draws power from a E-Cap; it is powered by a newly-developed replaceable E-Pac. If the beam rifle runs out of energy, the current E-Pac can be replaced by a new one.

Two Shield Boosters are attached to both arms of the Gundam TR-1 [Hazel], which contains propellant tanks and a single thruster with an output of 22,000 kg. This device is a further evolution of the sturm boosters (a device which contains thrusters for increasing propulsion purposes) used by earlier mobile suits, but unlike its ancestors the shield booster is retained as a shield after its propellant supply is exhausted, rather than being discarded when empty.

Like the RX-78NT-1 Gundam "Alex" developed during the One Year War, the RX-121 Gundam TR-1 [Hazel] is designed to use a Full Armor system. The Hazel is based on the RGM-79Q GM Quel, with enhancement parts added to each section to give it the high performance of a Gundam-type mobile suit. Of these enhancement parts, the "white parts" of the backpack, rear skirt armor, and leg sections are fixed in place, and only the armor on the front of its torso constitutes a detachable Full Armor system. When this detachable bulletproof armor is installed on the front of its torso, the armor damaged in battle can be easily replaced, which is an advantage in terms of maintenance. However, since the extra armor also increases the machine's weight, it has the drawback of impairing the Hazel's maneuverability.

The High Mobility Form of the RX-121 Gundam TR-1 [Hazel] is equipped with a total of three shield boosters, one on each arm and one on the movable booster pod attached to its enhancement backpack. When equipped with all its options, including the Full Armor system and the shield boosters, this is also known as the "Final Form." By orienting the thrusters of its three shield boosters in the same direction for maximum acceleration, it can achieve speeds comparable to those of a mobile armor. Holding grips designed specifically for this High Mobility Form can be installed in the shoulders of the [Hazel], and it can grasp them to fix its arms in position for stable cruising. This High Mobility Form and its concept of orienting the thrusters in a single direction would have a significant influence on the later development of transformable mobile suits by the Titans.

The Hazel would be used by the Titans Test Team, also known as the "Blue Otter Team," a year after the end of the Delaz Conflict. 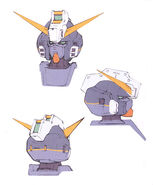 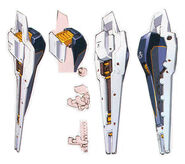 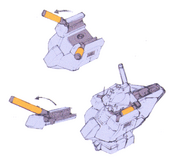 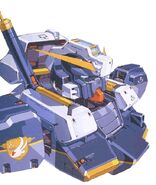 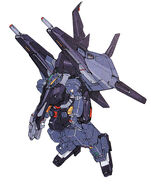 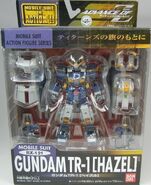