The RX-121-3C Gundam TR-1 [Haze'n-thley] is a concept Mobile Suit from the Gundam Universal Century timeline.

The RX-121-3C Gundam TR-1 [Haze'n-thley] is considered as the final unit of the Hazel series, which uses components from the RX-124 Gundam TR-6 [Haze'n-thley II] and the RX-121-2A Gundam TR-1 [Advanced Hazel]. As a result, virtually all the RGM-79Q GM Quel parts that remained in the Hazel are replaced by enhancement parts from both the TR-6. Because it uses the unmodified upper body of the Woundwort high-speed fighter form, its head, chest, and shoulders are very different in shape from those of the Hazel. This substitution is possible because the upper body of the TR-6 is the same size as the Hazel's Primrose escape system. It appears that the TR-6 components are actually installed on top of a RX-121-2 Gundam TR-1 [Hazel Owsla] torso, since the head and chest structures of the Owsla are visible underneath the new enhancement parts. The TR-6 booster pod is likewise connected to the same movable booster pod used by the original Hazel. Finally, the chest and arms of the base TR-6 mobile suit are attached to the waist of the Haze'n-thley as a sub-arm unit.

The standard armament for melee combat for Earth Federation mobile suits is the beam saber. The beam saber is a small cylindrical device held in the mobile suit's hands when operated and is powered by an energy capacitor that is recharged from special racks. The beam saber emits a blade of plasma contained by an I-field and is capable of cutting through any metal alloy. The Haze'n-thley mounts two in a recharge rack in the backpack behind the right shoulder.

The Machine Gun is a simple shell-firing machine gun that is based on older technologies, making it a weapon that can be cheaply produced and can be used by just about any mobile suit. The weapon has no where near the power of a beam rifle, thus its attacks can be stopped by a healthy layer of armor. The bullets are stored in magazines that can be replaced when they are used up.

The most unique weapon of the Haze'n-thley which is first used by the RX-124 Gundam TR-6 [Woundwort]. As the long blade rifle is used as a regular beam rifle, it also doubles as a shield to protect itself from enemies. It can also produce a heat blade, allowing it to cut down enemies when there's no time to deploy its beam sabers. The Long Blade Rifle can also transform into a miniature MS and can be used an an INCOM. Like all Beam Rifles of the period, the Long Blade Rifle is powered a a replaceable E-Pac.

A Pair of Sub-arm units were installed into the Haze'n-thley. The sub arm unit, one of the devices intended to connect to the multi weapon latch, contains secondary arms folded away inside what looks at first glance like extra skirt armor. These sub arms allow the Hazel to carry a beam rifle or other weapons even when both its main arms are obstructed by the attachment of shield boosters. The sub arms can also be used to wield secondary weapons like beam sabers, or to replace energy packs when both main arms are holding weapons.

The Haze'n-thley uses the same booster pod similar to the Regular Hazel, which contains propellant tanks and a single thruster with an output of 22,000 kg. This device is a further evolution of the sturm boosters (a device which contains thrusters for increasing propulsion purposes) used by earlier mobile suits.

An special type of escape pod, based on research and development conducted by the Konpeitoh technical headquarters after Lieutenant Wes Murphy’s Hazel was heavily damaged in combat with Zeon remnants. Although it resembles the core block system of the RX-78-2 Gundam, However, the Primrose functions purely as an escape system, lacking the docking and separation capability of the core block. As a result, it cannot dock under its own power once separation has been performed. But despite its simplicity, the Primrose is capable of independent flight, unlike the ejection pods installed in ordinary mobile suits, so the pilot’s chances of survival are dramatically increased. 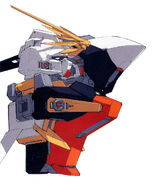 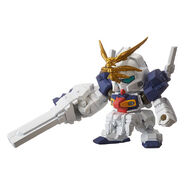 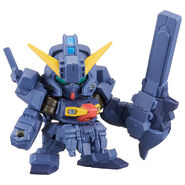