The RX-121-2 Gundam TR-1 [Hazel II] is a Mobile Suit from the Gundam Universal Century timeline. Appearing in the Advance of Zeta: The Flag of Titans manga. The unit is piloted by Eliard Hunter.

The RX-121-2 Gundam TR-1 [Hazel II] is a RGM-79Q GM Quel [Hazel Reserve Unit] stationed aboard the Titans Test Team mothership Aswan for parts exchanges, which has been equipped with a tri booster unit. This tri booster unit is a device with high thrust for use in assault operations, and the plan was to test it with the Hazel, but when the Hazel Reserve Unit is converted to the Hazel II this equipment is used for its main thrusters. However, because the Hazel II was constructed in a hurry, its balance couldn't be considered entirely satisfactory. The designation "Early Type" refers to the machine in the first stage of its conversion from Hazel Reserve Unit to Hazel II, before a crest-shaped sensor unit is installed in its head. The machine's colors are also the same as those of the RGM-79Q GM Quel on which it is based, and it has not yet been painted with the Titans Test Team's characteristic yellow pinstripes.

While its head remains unchanged from the Hazel Reserve Unit, the [Hazel II] Early Type is equipped with the same backpack and shoulder units as the original Hazel. However, since it doesn't carry shield boosters, its shoulders are usually fitted with multipurpose launchers rather than holding grips. It also lacks the movable booster pod of the original RX-121 Gundam TR-1 [Hazel], since the attachment point is taken up by the tri booster unit.

The Tri Booster Unit is a propulsion unit made up of two universal thrusters and a large central sturm booster. The direction of the universal thrusters can be freely controlled thanks to the articulated frame that connects them to the backpack, and this kind of technology will later provide the foundation for the movable frame. Unlike previous sturm boosters, the device used in the tri booster unit is freely movable, enabling it to be used for AMBAC maneuvering. Traces of this technology can be seen in the tail stabilizers used by later machines.

After being fitted with the tri booster unit, the Hazel Reserve Unit is re-designated as a combat machine in the military database, and given the Gundam name and RX-121-2 designation as part of the Hazel series. This kind of re-designation normally requires a great deal of time and complicated formalities, but the authority the Titans enjoy within the military enables them to complete the process very quickly. This exceptional re-designation also reflects the strong desires of its pilot Eliard Hunter.

The RX-121-2 Gundam TR-1 [Hazel II] is given a new color scheme when it formally enters service as Eliard Hunter's machine. Its head is also equipped with an enhanced sensor unit like that of the original RX-121 Gundam TR-1 [Hazel]. From this point on, the tri booster unit becomes standard equipment for the Hazel II. Like the original Hazel, the Hazel II can be configured in Full Armor Form. Although Wes Murphy concluded that this armor was too heavy for the original Hazel, the Hazel II can overcome this handicap because it has high output thrusters in the form of a tri booster unit or double shield boosters. 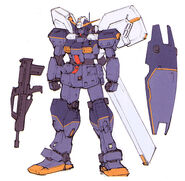 Retrieved from "https://gundam.fandom.com/wiki/RX-121-2_Gundam_TR-1_%EF%BC%BBHazel_II%EF%BC%BD?oldid=440265"
Community content is available under CC-BY-SA unless otherwise noted.