The RX-121-2A Gundam TR-1 [Advanced Hazel] is a mobile Suit from the Gundam Universal Century timeline. It appears in Advance of Zeta: The Flag of Titans.

The RX-121-2A Gundam TR-1 [Advanced Hazel] is the remodeled RX-121-2 Gundam TR-1 [Hazel II], with leg enhancement parts and a multi weapon latch installed to match the specifications of the RX-121-1 Gundam TR-1 [Hazel Custom]. A high-performance optical sensor unit like that of the RGM-79SR GM Sniper III has been added to its head, and supplemental thruster units to the soles of its feet. The movable booster pod on its enhancement backpack has also been replaced with a new type, tested on the RMS-117 Galbaldy β, which can be fitted with two shield boosters to increase its performance still further. The enhanced shield booster has ten diffuse beam guns installed on its surface, which increase the mobile suit's defensive capabilities by shooting down missiles and other projectile weapons. However, the shield booster's propellant capacity is reduced accordingly, giving it lower performance as a booster. All the test results of previous option parts were used in the creation of the Advanced Hazel.

Testing of the new booster pod with two shield boosters was originally meant to be conducted with the RMS-117 Galbaldy β High Mobility Type. However, this Galbaldy β was lost when Lt Maxim Gunar defected to the AEUG. The tests were thus performed with the Hazel II, and their results are reflected in the Advanced Hazel. The new booster pod lacks the generator and thruster equipment of the previous version, and consists of little more than latches for the shield boosters and an optional propellant tank, acting as a multi-connector pod. Meanwhile, the sub arm unit was also adopted due to the good results of its testing with the Hazel Custom.

The standard armament for melee combat for Earth Federation mobile suits is the beam saber. The beam saber is a small cylindrical device held in the mobile suit's hands when operated and is powered by an energy capacitor that is recharged from special racks. The beam saber emits a blade of plasma contained by an I-field and is capable of cutting through any metal alloy. Advanced Hazel mounts one in a recharge rack in the backpack behind the right shoulder.

Beside from the Machine Gun, Advanced Hazel can also equipped with a Beam Rifle. The particle beam fired from a beam rifle can penetrate almost any armor that has not been treated with specific counter-measures.

The Machine Gun is a simple shell-firing machine gun that is based on older technologies, making it a weapon that can be cheaply produced and can be used by just about any mobile suit. The weapon has no where near the power of a beam rifle, thus its attacks can be stopped by a healthy layer of armor. The bullets is stored on magazines that can be replaced when they are used up.

A basic optional arm-mounted defense armament for many Federation mobile suits. The shield is a thick sheet of armor designed to take severe punishment that would normally destroy a mobile suit. Since the introduction of beam weaponry, shields have been treated with an anti-beam coating allowing it to withstand several beam shots before the coating wears off. Typically physical shields can only take so much damage before they succumb to the pressure and break. A shield can be equipped to either arm of Advanced Hazel in order to increase defense against both beam and physical attacks.

Two Shield Booster are attached with the back of Advanced Hazel, which contains propellant tanks and a single thruster with an output of 22,000 kg. This device is a further evolution of the sturm boosters (a device which contains thrusters for increasing propulsion purposes) used by earlier mobile suits, but unlike its ancestors the shield booster is retained as a shield after its propellant supply is exhausted, rather than being discarded when empty. This device would then be upgraded into the even more powerful Enhanced Shield Booster.

The Advanced Hazel was deployed during the final days of the Gryps Conflict piloted by both Eliard Hunter and Audrey April in pursuit of Carl Matsubara. 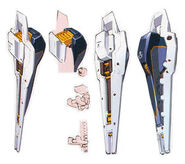 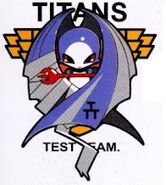 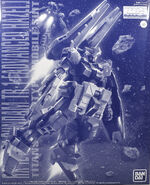