After Lt. Wes Murphy's Gundam TR-1 [Hazel] was heavily damaged in combat with Zeon remnants, it is repaired and improved using a RGM-79Q GM Quel stationed at Konpeitoh and spare Hazel parts stored aboard the Aswan. This "Hazel Custom" reflects the combat data and development know how accumulated by the original Hazel. The machine's enhancement parts, which previously seemed like an afterthought, have been better balanced with the other parts and the machine's internal structure to make it a more complete mobile suit. As a result, its external appearance has a more unified feel, and its lighter weight and increased thruster output give it roughly 10% greater acceleration. A 360-degree panoramic monitor and linear seat system have been installed in its cockpit on an experimental basis, and its operating system has also been upgraded, so this machine's operation is greatly advanced from the original Hazel. The model number of this rebuilt Hazel has been shifted from RX-121 to RX-121-1. Because the Hazel's unique shield boosters were lost in its previous battles, the Hazel Custom is equipped with a normal shield for the time being. The loss of the shield boosters admittedly reduces the Hazel Custom's mobility, but its overall performance increase is enough to make up for this. Due to its redeployment schedule there wasn't time to repaint the machine in Titans colors, so most of its armor remains the grey color in which it was molded.

The Hazel Custom's basic specs, including its generator and thruster performance, are similar to those of the GM Quel. Its leg sections house thermonuclear rocket engines with an output of 17,500 kg apiece, and its backpack is equipped with the same movable booster pod as the original Hazel. The thermonuclear reactor inside this pod serves as both a supplemental generator and a hybrid jet/rocket engine, with an output of 390 kW and 18,000 kg respectively. The Hazel Custom retains the support actuator units and enhancement parts of the original Hazel, and can carry all the same equipment. A multi weapon latch can be plugged into its center skirt armor to support options like a sub arm unit or a flexible beam rifle unit, and another multipurpose latch is located above its cockpit hatch. While the Hazel Custom's High Mobility Form is identical to that of the original Hazel, its Assault Form is equipped with the same booster pod used by the RMS-117 Galbaldy β High Mobility Type, rather than the Hazel's usual movable booster pod. Two shield boosters are attached to this booster pod, and the mobile suit is also equipped with the Galbaldy β's extendable shield.

A variation of the Hazel Custom, this version features the long blade rifle used by the RX-121-1+FF-X29A Gundam TR-1 [Hazel-Rah]. Equipped with one shield booster, this version also features a monoeye visor in place of the standard dual eyes.

The multi weapon latch in the center skirt armor of the RX-121-1 Gundam TR-1 [Hazel Custom] is designed to serve as a multipurpose joint for various option parts used by the Hazel. This sub arm unit, one of the devices intended to connect to the multi weapon latch, contains secondary arms folded away inside what looks at first glance like extra skirt armor. These sub arms allow the Hazel to carry a beam rifle or other weapons even when both its main arms are obstructed by the attachment of shield boosters. The sub arms can also be used to wield secondary weapons like beam sabers, or to replace energy packs when both main arms are holding weapons. Despite the effectiveness of the Sub Arm unit, the complexity they add to the mobile suit's fire control means they require a high degree of pilot skill, so this system is never widely adopted. 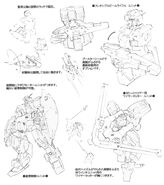 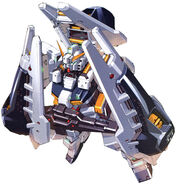 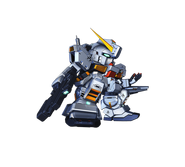 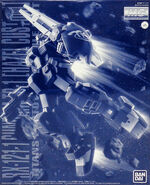 Retrieved from "https://gundam.fandom.com/wiki/RX-121-1_Gundam_TR-1_%EF%BC%BBHazel_Custom%EF%BC%BD?oldid=445805"
Community content is available under CC-BY-SA unless otherwise noted.