The RX-121-1+FF-X29A Gundam TR-1 [Hazel-Rah] Second Form is a Mobile Suit from the Gundam Universal Century timeline. Appearing in the Advance of Zeta: The Flag of Titans manga.

The RX-121-1+FF-X29A Gundam TR-1 [Hazel-Rah] Second Form is equipped with two FF-X29A G-Parts [Hrududu］units. The Hrududu, developed as a set of enhancement parts for the RX-121-1 Gundam TR-1 [Hazel Custom], is designed to connect not only to its backpack joint, but also to its multi weapon latch and the side armor of its waist section. This form is equipped with a total of four binder-like wing units, and the functions of the upper and lower pairs are standardized, with two thruster wing units on the backpack for propulsion and two claw wing units on the waist to carry and control weapons. The machine's operating efficiency is thus raised to its maximum limit. The Hrududu's nose sensor unit can also be used as a connector for shield boosters. This makes it possible to attach two shield boosters to a single one of the mobile suit's arms. By this point, the Hazel Custom has been repainted in official Titan colors and equipped with the same optical sensor unit and foot thrusters as the RX-121-2A Gundam TR-1 [Advanced Hazel]. The two machines can still be distinguished by their distinctive booster pods, and the fact that the Hazel Custom's waist armor is painted the same dark blue as its chest.

The [Hazel-Rah] Second Form can also be equipped with the booster used by the ORX-005 Gaplant. By orienting the thrusters of the Gaplant booster, the four wing units, and the two shield boosters in the same direction, it can achieve tremendous thrust. This could be described as a cruising form which places an emphasis on acceleration, rather than general-purpose combat capability as a mobile suit. With the long cruising range and powerful acceleration provided by the Gaplant booster, the Hazel-Rah can perform independent attacks over ranges that would normally be inconceivable. As a result, it can use its acceleration for hit-and-run tactics and carry out special operations such as raiding attacks deep into enemy territory. 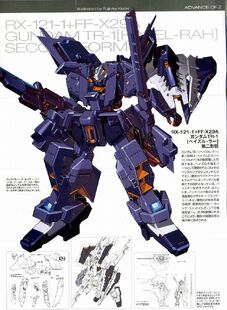