The RX-110 Refined Zorin Soul is a Man-Machine used by Metatron. It is featured in the novel Gaia Gear.

The Zorin Soul was developed by Anaheim Electronics and roll out in U.C. 0110. It was a high performance unit fitted with the most advanced technology at that time, including a miniaturized Minovsky Craft System for flight, a Minovsky Barrier for defense, and also a Psycommu System to allow the use of the remote controlled funnels. However, as the views on large and expensive units within the Earth Federation Forces began to turn negative, the Zorin Soul's development was cancelled. Almost a century later, a Zorin Soul fell into the hands of the Metatron. Using its sturdy basic design as the base, the Metatron carried out several rounds of upgrades to the machine's avionics, turning it into a Man-Machine with performance comparable to the latest Man-Machines. Its armor was also improved and adjustments were made to the Psycommu System among other modifications. 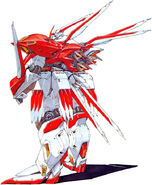 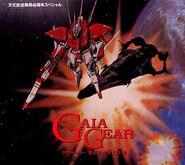 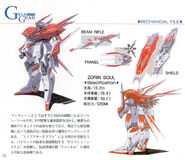