The RX-107 TR-4 [Dandelion] is a prototype transformable mobile suit, it was featured in the photo-novel Advance of Zeta: The Flag of Titans. The unit is piloted by Carl Matsubara.

The RX-107 TR-4 [Dandelion] is a prototype atmospheric entry module developed for special operations. In recent years, the ballute system has been introduced as optional equipment which allows a mobile suit to enter the atmosphere independently. However, a descent using the ballute system requires a sequence of adjustments beforehand and transportation to satellite orbit by a carrier ship. Seeking a smoother method for Earth descent operations, the Titans remodeled the RX-107 Rosette to create the Dandelion, which has thrust and cruising range comparable to those of a mobile armor. This machine can travel to a descent point in satellite orbit under its own power, even while carrying a mobile suit, and because it can function as a sub flight system after entering the atmosphere, it can engage in combat and change its landing point after entry.

Although the Dandelion shifts between an atmospheric entry form, a mobile armor form, and a mobile suit form, this isn't a so-called "transformation." Instead the machine is designed with the concept of a "form shift" adapted to the changing circumstances of atmospheric entry, in which little thought is given to returning to a previous form. Parts which become unnecessary after entering the atmosphere can thus be detached and discarded, and it's possible to purge all these parts, ultimately leaving only the core mobile suit which contains the cockpit block.

Atmospheric Re-entry Form: When entering the atmosphere, the Dandelion turns around and orients the heat-resistant lunar titanium alloy armor on its upper surface toward the entry direction. By deploying a heat-resistant field of coolant gas it can perform an atmospheric entry with a relatively high degree of freedom, keeping the descent sequence of complex attitude control and entry angle adjustments to a minimum. This atmospheric entry form can perform a descent with an additional mobile suit stored inside it, and within the atmosphere it also functions as a sub flight system.

Mobile Armor Form: The Dandelion's mobile armor form is used as for high mobility fighting in space and in midair, and when it deploys the claw arms used for melee combat and AMBAC maneuvering it closely resembles the MA-05 Bigro used by the former Principality of Zeon forces. While its atmospheric entry form is little more than a drop pod with flight capabilities, when the machine shifts to its mobile armor form its characteristics undergo a dramatic change, and it becomes more of a combat-oriented weapon. The Dandelion enters the atmosphere upside down, protected by its lunar titanium armor and a heat-resistant field produced by the three emitters in its central armor section, and then uses its protective cover panels and tail binder as air brakes.

Mobile Suit Form: Although this is called a mobile suit form, it's actually a hybrid in which the upper body of the core mobile suit is exposed and the Dandelion's atmospheric entry module becomes the lower body. This form is intended mainly for ground combat, and the sections which function as claw arms in its mobile armor form serve as supplemental leg units to support its great weight. This form isn't particularly oriented toward walking, but tactics such as using its high thrust for hovering movement or engaging in midair combat via "thruster jumps" prove quite effective. In mobile suit form, the central armor section becomes a shield, the side armor sections serve as skirt armor and high mobility binders, and its claw arms function as leg units. Its main weapon is a long-range beam rifle powered by two energy packs.

The data from the Dandelion would go on to create the NRX-055 Baund Doc. 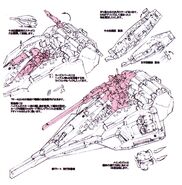 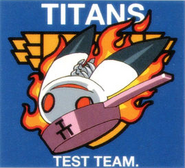