The RX-105 Ξ Gundam, also known as the Xi Gundam ( ガンダム, Kusī Gundam?, "Ksi Gundam") [2][5], is a mobile suit that appears in the Mobile Suit Gundam Hathaway movie. Procured by the Anti-Earth Federation movement Mafty for the attack on the Adelaide conference [4], it was piloted by Mafty Navue Erin [3].

It and the RX-104FF Penelope were classified as fifth-generation MS and are said to have been developed and constructed by Anaheim Electronics. It was a unique MS with a built-in Minovsky Flight Unit and was equipped with the latest Beam Barrier system. Since the Penelope relied on optional units to obtain similar functions, it can be said that the Xi Gundam was a truly completed fifth-generation MS that could function independently. Furthermore, it was armed with standard equipment such as a Beam Rifle and Shield, as well as Funnel Missiles that made it a unique, heavily armed unit. The large arms were also one of its iconic external features and the forearms also functioned as containers for Triple Missiles. The Xi Gundam was an MS of an extremely high degree of perfection which fought against the Penelope and the Circe Unit with Hathaway Noa as its pilot [4].

The Xi Gundam's main armament. It is said that its initial velocity was close to double the specs of previous models and its power was enough to destroy a Gustav Karl in a single shot. An Energy Pack was attached to the rear end of the weapon [4].

According to their Equipment Index, Mafty possessed 3 beam rifles and 30 energy packs [3].

Melee combat armaments equipped on the left and right shoulders. Their high output enabled them to cut MS in half. They could also generate beam blades from the bottom of the handles in a similar way to the armaments used by the RX-93 ν Gundam [4].

The forearms functioned as containers for Triple Missiles [4]. They could also be launched from the knees [3].

According to their Equipment Index, Mafty possessed 84 of these missiles [3].

Psycommu-guided missiles that could change their trajectory and track targets to a certain degree after being launched in environments where Minovsky Particles have been released. Ten missiles could be equipped on the back of the rear skirts [4].

According to their Equipment Index, Mafty possessed 80 funnel missiles [3].

According to their Equipment Index, Mafty possessed 2 shields [3].

It was also equipped with a Beam Cannon on its tip, functioning as a secondary weapon [4].

The shoulder armor equipped with the Minovsky Flight Units and the stabilizer on the back could be extended to transform into a Flight Form. Beam Barriers generated through the aerodynamic control technology could be used during this form to enable supersonic flight abilities and a vast cruising range. Its maximum speed is said to have reached Mach 2 [4].

After separating a Messer from the deck of a Galcezon, Hathaway boarded the Cargo Pisa, which had descended towards Earth, and entered its deck. He then saw the Xi Gundam stored within the ship and slid into its cockpit. The ship's altitude plummeted every second, but Hathaway activated the MS, escaped from the ship, fended off an enemy MS unit, and lowered his MS towards the surface of the ocean. The Penelope was in pursuit of the MS and released Funnel Missiles which crashed on impact with the ocean surface, creating columns of water. The Xi Gundam glided just above the water's surface and launched its Beam Rifle in front of itself as a decoy. This attempt was successful as the Penelope fired at the Beam Rifle. The Xi Gundam used the opportunity to confront the Penelope and unleashed the Funnel Missiles [7][3]. 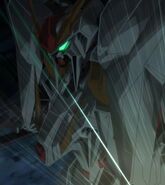 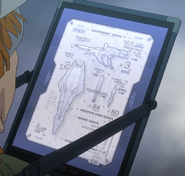 Mafty's Equipment Index showing the total number of weapons and spare parts for the Xi Gundam [3].