The RX-104FF Penelope (RX-104FF ペーネロペー, RX-104FF Penelope?) is a mobile suit that appears in the Mobile Suit Gundam Hathaway movie [1][7]. It was piloted by Lane Aim of the Earth Federation Forces' Circe Unit [6]. In U.C. 0105, in response to Mafty's anti-Federation activities and assassinations of Federation bureaucrats, the Circe Unit was ordered to capture and destroy the members of Mafty. Hathaway's Ξ Gundam and Lane's Penelope, two Gundam-type mobile suits, confronted each other on Earth [5].

The RX-104FF Penelope was a mode where the RX-104 Odysseus Gundam was equipped with the FF (Fixed Flight) unit. It was classified as a fifth-generation MS alongside the RX-105 Ξ Gundam, which was developed around the same time. The MS was unique due to its capability to achieve independent flight and was considered to be an MS that would greatly change the course of mobile suit operations under gravity. These functions largely depended on the FF Unit, while the Ξ Gundam had a different structure that integrated all of the functions into a single MS. In addition to the FF unit, it was said that an optional armament known as the Argos Unit was developed but its details were unknown. It was also said to be equipped with a Psycommu or Quasi-Psycommu unit. The MS was also capable of supersonic flight by deploying a Beam Barrier in its direction of movement, but this required the MS to transform into its Flight Form [2].

A portable beam weapon dedicated to the Penelope. Two types of energy packs with different shapes were mounted behind the engine and in front of the trigger guard [2].

A combined armament equipped on both forearms. It was a unique weapon that housed a Mega Particle Cannon, a Beam Saber and missiles in a single unit [2].

Psycommu-guided missiles. A large number of them were equipped throughout the right and left shoulder armor and the front of the waist armor. It was said that the MS was equipped with more missiles than the Ξ Gundam [2].

The RX-104 Odysseus Gundam (RX-104 オデュッセウスガンダム, RX-104 Odysseus Gundam?) was a Gundam-type MS which was the basic structure of the Penelope. The MS itself was similar to a second-generation MS, but it was capable of higher performance and was created with the intention of equipping the FF Unit. Its shoulders extended and the support legs were deployed when equipping the unit [2].

One piece of optional equipment for the Odysseus Gundam. It was equipped to its torso, shoulders, hips and legs. It had various sensors on its nose and was a type of multi-purpose equipment which functioned as a weapons platform [2].

An optional armament, the details are currently unknown [2].

Kenji Mitsuda deduced that the new commander of the Kimberley Unit, Kenneth Sleg was responsible for a new model of mobile suit being tested. Fencer Mayne and Civet Anhern also discussed the new model when Mafty prepared for their diversionary attack, but Gawman Nobile was unfazed [6].

The Penelope in Flight Form would be seen by Emerelda Zubin, Hathaway and Gigi Andalucia shortly after the diversionary attack commenced, leading Hathaway to conclude that they had been played by Anaheim [6].

While Kenneth was tracking Mafty's movements, the Circe Unit was on stand-by with Lane setting his eyes on the Penelope. After Gawman was beaten unconscious by Kenneth during an interrogation, he woke up in the Penelope's cockpit [6].

After Lane spotted the descending Cargo Pisa he fired the Penelope's Beam Rifle at it. The Penelope then descended head first to match the velocity of Cargo Pisa. Seeing the Xi Gundam climbing out of it, the Penelope fired two simultaneous shots from its shoulder-mounted Mega Particle Cannons, but the Xi Gundam dodged them. The Xi Gundam shot back at the Penelope, but it also dodged. The Penelope kept returning fire with its Beam Rifle. Eventually the Penelope successfully landed a hit on the Xi Gundam, severely damaging its shield. The two gargantuan mobile suits clashed their Beam Sabers. Lane opened a communications channel to Hathaway. Because of this, Hathaway heard the screams of Gawman in the Penelope's cockpit [6].

Lane backed off for the moment, keeping the Penelope at a distance. A Gustav Karl Type-00 fired upon the Xi Gundam but Lane somehow got the pilot to withhold fire. Hathaway moved the Xi Gundam and opened its hatch. Gawman dropped from the Penelope into the Xi Gundam's cockpit [6].

The Penelope fell back, firing its Vulcan machine guns, but the Funnel Missiles severely damaged the Penelope and it crashed into the water. At dawn, Lane regained consciousness and dismounted himself from the Penelope's pilot seat. He opened a survival pack case containing a firearm and opened the Penelope's cockpit hatch, flooding it with water. He climbed out of the water, onto the back of the Penelope's Fixed Flight Unit [6]. 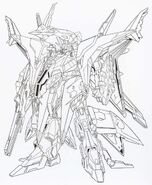 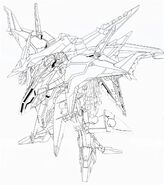 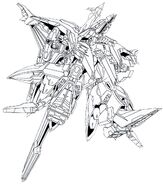 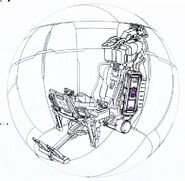 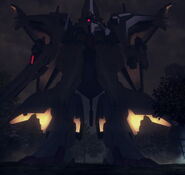