The RX-0 Unicorn Gundam 03 Phenex was a new machine secretly built under the direction of a EFSF official who disapproved of the Vist Foundation's involvement in the UC Project. Using a psycho-frame body delivered in advance, it was assembled independently by the Earth Federation Forces and reflects the data of Units 1 and 2. Rather than that of a Unicorn, the Phenex's motif is that of a phoenix, illustrated with a much more elaborate horn/V-fin and a golden body.

A basic armament found on many Federation mobile suits. While ineffective against mobile suit armor, they are useful in intercepting incoming missiles/rockets, destroying mobile suit sensors, and engaging lightly-armored vehicles.

The normal I-field equipped shield used by the Unicorn Gundam with additional parts containing a propulsion system and a mega cannon, it is similar to Shield Boosters that were used in the Gryps Conflict. The Phenex is equipped with two such shields and they are mounted on the back like a pair of wings, demonstrating explosive accelerations. DE stands for Defense Extension. The version featured in Mobile Suit Gundam Narrative has tail-like stabilizers on the Armed Armor DEs for attitude control and can be used as remote-controlled weaponry.

The standard close range armament for most Federation mobile suits. The Phenex is equipped with four beam sabers, two on the forearms, and two in the backpack. In Unicorn mode, the MS only has access to the two forearms mounted beam sabers. In Destroy Mode, the other two beam sabers flip out from the backpack, allowing access to all four sabers.

The forearm-mounted beam sabers can be flipped over and used directly. In this form, the weapon is known as beam tonfa.

A highly customized beam rifle designed with an energy condenser, a single shot from the beam magnum is equal in power to 4 normal beam rifle shots but it uses up an entire E-pac. Each of the beam magnum's magazine is loaded with 5 E-pacs, allowing a total of five shots before a new magazine is needed. The Phenex can carry two spare magazines on its rear skirt armor.

An anti-Newtype system developed by the Earth Federation and used on the RX-0 series. The NT-D system works by using the psycho-frame built within the mobile suit's body to seek out Newtype brainwaves. Should one be found, the system activates and turns the Unicorn Gundam (the Unicorn Gundam, the Banshee, and the Phenex) from its usual "Unicorn mode" into its "Destroy mode", improving its stats overall and allowing it to take control of Newtype weaponry used by others and turn them against them. However, the system has a number of flaws. Among them is having a five minutes usage limit so it wouldn't kill its pilot and the fact that it doesn't discriminate against real Newtypes and Cyber-Newtypes. Its most ironic flaw is that, because of the massive stress put on the pilots, a Newtype is the best pilot for the unit. Perhaps the greatest flaw is that the NT-D activates automatically when a Newtype opponent is detected and will attack even against the pilot's wishes. Thankfully, those with strong wills can overpower the system and determine when it can activate.

In December 3, U.C.0095, the Phenex was deployed with the RX-0 Unicorn Gundam 02 Banshee in a debris-filled shoal zone due to reports of a Neo Zeon MS performance test. It then encountered the "Sleeves" and engaged in a heated battle against the AMX-107R Rebawoo. After repelling the Rebawoo, a psycho-frame resonance with the Banshee and the Rebawoo caused the Phenex to become uncontrollable. The Phenex attacked the Banshee, damaging it and then transformed into its Destroy Mode before destroying the bridge of the mothership, the Irish-class ship Échalote with its Armed Armor DEs. It went missing afterwards and only reappeared a year and a half later in U.C.0097.[2]

Following its return, the Earth Federation Forces cruiser Damascus was deployed as part of the "Phoenix Hunt" taskforce at the request of the Intelligence Bureau to capture the Phenex. With the intervention of Jona Basta and the RX-9/A Narrative Gundam A-Packs, the operation almost succeeded, but Jona allowed it to escape. The Phenex reappeared to assist Jona and his RX-9/B Narrative Gundam B-Packs in the battle against Zoltan Akkanen and the MSN-06S-2 Sinanju Stein at the Metis Colony, before fleeing the colony at a speed close to light speed. During the final battle against the NZ-999 II Neo Zeong at the Helium-3 storage base, Jona entered the Phenex's cockpit after escaping the destruction of his RX-9/C Narrative Gundam C-Packs using the Narrative's core fighter.[2]

With Jona at the controls, the Phenex activated its NT-D System, transforming into Destroy Mode and swiftly defeated the II Neo Zeong and Sinanju Stein. However, Zoltan's death released psychic energy that caused all the nearby Helium-3 storage tanks to reach critical. Thankfully, the Phenex was able to utilize the pieces of psycho-frame scattered earlier by Michele Luio and Brick Teclato to generate a pair of wings with its Armed Armor DEs to reverse the explosion and make the II Neo Zeong vanish. With its task complete, the Phenex sped away in Destroy Mode, leaving Jona behind with Banagher Links who noted that even moving at light speed would not be enough to catch up with it.[2] 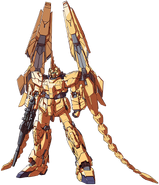 In Mobile Suit Gundam UC: One of Seventy Two 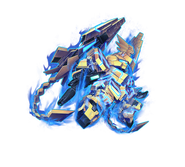 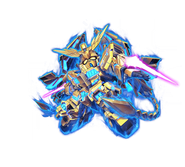 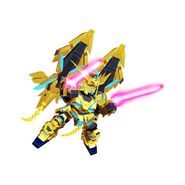 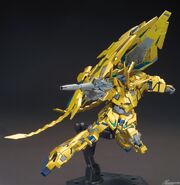 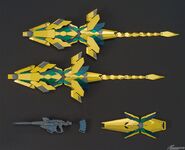 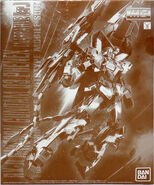 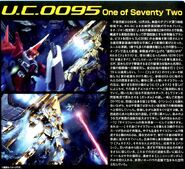