After its completion alongside the Unicorn Gundam, the Banshee was stationed on Earth by the Augusta Research Lab and tested for atmospheric combat. Rather than that of a Unicorn, the Banshee's motif is that of a lion, illustrated with gold accents on the forehead, a golden collar to signify a lion's mane, and a much more elaborate horn/V-fin.

The Banshee's armor is all-black and its psychoframe emits a golden-orange glow when the NT-D is activated, giving it the nickname "psychoflame". Although the Banshee lacks the Unicorn's distinctive La+ System, its performance in atmospheric combat is vastly superior, presumably because of a significant reconfiguring of the suit's operating system to account for Earth's gravity and the atmosphere's frictional resistance.

Combat improvements were made according to Unicorn Gundam's battle data, which had been relayed to the Augusta Research Lab. However, the two Gundams have no major operating differences. Aside from lacking the Unicorn's La+ operating system, the Banshee's raw performance is equal to that of the Unicorn. In other words, any modification to the Banshee (i.e. atmospheric combat performance) could also be applied to the Unicorn, making both suits equal in ability.

Housed in the head on the OVA version. Hobby Japan lists it as a beam vulcan gun, though standard live rounds can also be used.

A highly customized beam rifle designed with an energy condenser, mirroring the output of large mega-particle cannons. Normally, It functions like an ordinary beam rifle, but utilizes a special E-cap magazine mechanism to produce mega-particle cannon yield at the expense of an entire E-cap battery. The Unicorn Banshee can be outfitted with up to 10 spare customized E-Pacs on the back of its skirt.

Each forearm stores a beam saber. In Destroy Mode, two additional beam sabers deploy from the backpack in a design reminiscent of the RX-78 Gundam.

Housed within the shoulder assembly; only operable in Destroy mode. Hobby Japan lists this weapon as beam vulcan gun, although standard projectile ammunition is primarily used.

Houses an I-Field barrier generator; usable in both Unicorn and Destroy modes.

A weapon featured only on the OVA version, it is fixed on the left arm. The Armed Armor VN is a Psycoframe-embedded destructive vise-like weapon that utilized super-vibration to effectively destroy mobile suits. In Destroy mode the weapon transforms into a shape similar to a beast's claw. It is treated with beam-resistant coating and can also be used as a shield or striking weapon when in Unicorn mode.

A weapon featured only in the OVA version, it is equipped on the right arm. A Psycoframe-embedded long-range beam smart gun, it is capable of extremely accurate firing, achieved by a special built-in sensor unit transmitting spatial data to the pilot via Psycommu system and using the pilot's reaction to synchronize the beam-directing "fins". The weapon can be used in both Unicorn and Destroy modes

Developed also by Anaheim Electronics, the RX-0-2 Unicorn Gundam "Banshee" is virtually identical to the RX-0 Unicorn Gundam piloted by Banagher Links, except for its color more ornate V-Fin, and the lack of the La+ system.

At Augusta, Banshee is assigned to the captured but brainwashed Marida Cruz. It first sortied at Dakar to capture the Unicorn Gundam after Riddhe had confronted Banagher about the events of both their family's complicated past. Banagher would then come to battle the Banshee, in an attempt to snap Marida back to her senses and away from Martha's influence. Later after Zinnerman and Banagher managed to bring back Marida, this unit was recovered by the Federation and assigned to Riddhe Marcenas, with Alberto hiding this act from Martha. During the final battle, Banshee confronts Unicorn again and both activated their NT-D. Banshee seemed to have an upper hand since Banagher was unwilling to fight against Riddhe, whom he trusted. In the meantime, Nahel Argama fires to cover Banagher and causes Riddhe to think that everyone is betraying him, and thus aroused by anger he fires at the Nahel Argama, but Marida blocked the shot with her damaged Kshatriya, dying in the process.

The explosion of the Kshatriya's psycho frame lets Marida for the last time tell Banagher to forgive Riddhe, as he was filled with hatred and wanted to blast him out right away. She reminds Banagher that only the unicorn and lion together would bring a new hope. She also tells Zinnerman that she was glad to meet him. Zinnerman begged her not to leave, but she said that she was grateful for his care of her and satified. Riddhe eventually realizes what he should do. Banshee and Unicorn later confront Full Frontal in his damaged Sinanju together, and Banagher killed Frontal. Together with Unicorn, Banshee activated the psychofield and blocked the laser fired from Colony Laser II. Then Banshee joined to stop the attack from EFSF ultimately before the attack was called off.

The Unicorn Gundam "Banshee" first appeared after the AMA-X7 Shamblo was defeated during an attack on Torrington Base. The Banshee was dropped from a Vist Foundation Base Jabber and descended upon the MSN-001A1 Delta Plus and RX-0 Unicorn Gundam. After disabling the Delta Plus, the Banshee secures both suits and brings them into the Ra Cailum.

Note: Much of the Unicorn Gundam Banshee's history can be found on Marida Cruz and Riddhe Marcenas's pages 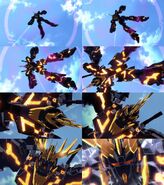 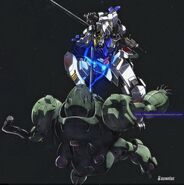 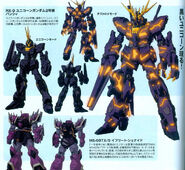 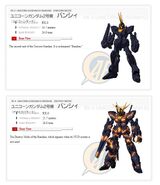 Retrieved from "https://gundam.fandom.com/wiki/RX-0_Unicorn_Gundam_02_Banshee?oldid=199698"
Community content is available under CC-BY-SA unless otherwise noted.