The Full Armor Plan B is an alternative enhancement plan to the RX-0 Full Armor Unicorn Gundam. It is equipped with every piece of equipment from the Armed Armor series, changing the Unicorn's appearance to an angelic shape and the unit's psycoframe is now blue like that of the Phenex.

While less heavily armed than the Full Armor Unicorn, this configuration of the Unicorn maximizes its mobility. A pair of Armed Armor DE units attached to the backpack provide it with additional thrust, I-field coverage, and the beam cannons integrated into each shield, while the backpack's beam saber mounts are used to mount the Armed Armor XC from the Banshee Norn. The Unicorn's forearms are equipped with the Armed Armor BS and Armed Armor VN from the Banshee's original loadout, with the right arm typically also carrying a hyper beam javelin. For reasons not explained, the color of the hyper beam javelin's beam blades changes to blue while this armor is equipped.

A Psycoframe-embedded weapon fixed on the left arm. The Armed Armor VN (Vibration Nails) can transform into a shape similar to a beast's claw in both Unicorn or Destroy mode, and uses the super-vibrating vice-like claws to effectively destroy mobile suits. It is treated with beam-resistant coating and can also be used as a shield or striking weapon when in closed-mode.

Two large beam blades, one shaped like a spearhead and the other like an axe, attached to a long handle in a design reminiscent of a halberd. The hyper beam javelin is also embedded with Psycoframe and is part of the Armed Armor series. The javelin can be used as a double edged weapon. Mounted on the Armed Armor DE's backpack connecter when not in use.

The Unicorn Gundam Perfectibility appeared in an alternate depiction of the final battle of Mobile Suit Gundam Unicorn where it was used instead of the original Full Armor equipment. The Unicorn Gundam Perfectibility launched from the SCVA-76 Nahel Argama and then transformed from Unicorn Mode to Destroy Mode as it confronted the NZ-999 Neo Zeong. The two machines exchanged gunfire before the Neo Zeong destroyed one of the Unicorn's Armed Armor DE with a Wired Large Funnel Bit. The Unicorn counterattacked by destroying several other bits with its Hyper Beam Javelin, it then launched the second Armed Armor DE as a remote weaponry to block beam fire from the Neo Zeong's Large Mega Particle Shoulder Cannons. Shots from the Unicorn's Armed Armor BS and Armed Armor DE subsequently destroyed the Neo Zeong's Sturm Boosters. The Neo Zeong deployed its Psyco Shard Generator to destroy the Unicorn's projectile and beam weaponry, but the Unicorn retaliated by grappling the Neo Zeong's head with its Armed Armor VN and left hand. Full Frontal then reflected on himself before he and Banagher Links were engulfed in a burst of light. 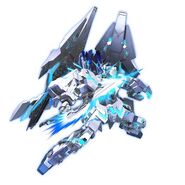 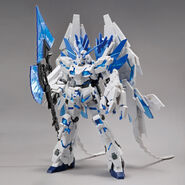 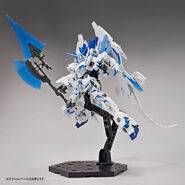 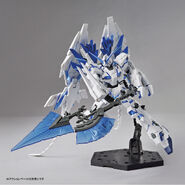 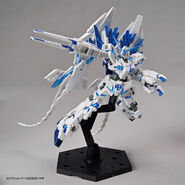 Retrieved from "https://gundam.fandom.com/wiki/RX-0_Full_Armor_Unicorn_Gundam_Plan_B?oldid=415470"
Community content is available under CC-BY-SA unless otherwise noted.