The Full Armor Unicorn Gundam was an enhancement plan devised by Takuya Irei while aboard the Nahel Argama and is based on his extensive knowledge of mobile suits. After Banagher's Newtype potential manifests itself, the psycoframe changes color to a vibrant green. Unlike other mobile suits with the Full Armor designation, the FA Unicorn does not have any additional armor for the MS itself (except additional shields). However, it does introduce a large array of weapons, which are added to the legs, backpack and forearms.

The new array of weapons includes two backpack-mounted hyper bazookas, numerous hand grenades, two grenade launchers, two missile pods, three pair of Gatling guns, and two additional shields, one on the backpack and the other on the right forearm. The backpack also features two boosters taken from a Base Jabber Type 94 to compensate for the increased mass, with one of the additional shields situated between them. Thanks to its large amount of armament, the Full Armor Unicorn Gundam can handle any combat situations, and all the added weaponry can be ejected whenever their ammunitions are spent to avoid becoming dead-weight. Like the normal Unicorn, the Full Armor Unicorn can take control of an enemy's psycommu weapons, even Quasi-Psycommu bits, when the NT-D is activated.

A Gatling-style beam weapon with high-rate firing. Originally a Neo Zeon weapon, the beam gatling gun can be used with the Unicorn due to Anaheim's universal weapons standard. While it is capable of unleashing a torrent of beam fire, individual shots are relatively weak as they are seen to only chip away at the armor of an AMX-009 Dreissen. After joining the crew of the Nahel Argama, the crew of the Garencieres provide a total of six Beam Gatling Guns for the Full Armor Unicorn, paired in sets of two and mounted on the underside of the three shields.

A highly customized beam rifle designed with an energy condenser, a single shot from the beam magnum is equal in power to 4 normal beam rifle shots but it uses up an entire E-pac. Each of the beam magnum's magazine is loaded with 5 E-pacs, allowing a total of five shots before reloading. The Unicorn can carry two spare magazines on its rear skirt armor.

The Unicorn is equipped with four beam sabers, two on the forearms and two in the backpack. In Unicorn mode, the MS only has access to the two forearm mounted beam sabers. In Destroy Mode, the other two beam sabers flip out from the backpack, allowing access to all four sabers.

A four-petal shaped shield that houses an I-field barrier generator, which is operational in both Unicorn mode and Destroy mode. Three of these shields are mounted on the Full Armor Unicorn Gundam, and together they can provide almost 360 degrees of I-Field protection. Due to the properties of the psycoframe allowing for direct manipulation of an object by a Newtype, the suit is able to use the shields as remote controlled weaponry despite them lacking any actual thrusters.

When Minovsky particles are released into the air or into open space, the positive and negative particles spontaneously align themselves into a three-dimensional cubic lattice. Due to the repulsive and electrostatic forces between the Minovsky particles, this lattice functions as a kind of a force field, which is referred to as an I-field. This field has difficulty permeating conductive materials like metal, water, and plasma, and it exerts a repulsive force against mega particles. An I field is used to to deflect enemy mega particle beams. Due to its high power requirements, the I-field generator originally could only be installed in large mobile weapons. When the generator is activated, the I-field forms an invisible barrier around the mobile weapon, protecting it from incoming beam attacks. However, this barrier has no effect against solid objects like missiles and projectiles, and beam weapons can still be used at point blank range within the barrier's boundary.

Two large beam blades, one shaped like a spearhead and the other like an axe, attached to a long handle in a design reminiscent of a halberd. The hyper beam javelin is also embedded with Psycoframe and is part of the Armed Armor series. The Unicorn stores two folded javelins underneath the shields on each arm and can use them when stored, much like the MSN-06S Sinanju's beam axe. The javelin can be used as a double edged weapon, and the spearhead can be used as a bayonet on Unicorn's Beam Magnum.

Mounted on the underside of each hyper bazooka's barrel. They are clip fed and can be fired while mounted or handheld.

Same weapon as used by the RGM-89S Stark Jegan, a missile launcher housing three missiles is attached to each of the bazookas.

Same weapon as used by the RGM-89 Jegan, the Full Armor Unicorn Gundam has a total of 24 hand grenades stored in 8 grenade racks. 4 grenade racks are attached to the legs, and the other 4 are strapped to the side of each bazooka. The hand grenades can be fired directly from their racks.

A unique Operating System that slowly reveals the path to open Laplace's Box once certain requirements are met. This program was not in the original specifications but rather added later by the Vist Foundation. The system is also responsible for registering Banagher's biometrics, making the Unicorn Gundam impossible to pilot by other indivduals other than him. The program appears to be closely tied to both the NT-D and the Unicorn's pilot. Upon reaching Laplace at midnight Greenwich Mean Time, the program will broadcast the Universal Century inauguration speech and Federation Universal Century Charter made at Laplace in UC 0001. Following that, the next checkpoint given by the La+ Program is Torrington Base in Australia (in the novel version of Unicorn, the checkpoint on the Earth was actually Dakar, the capital of Earth Federation). Ultimately, according to Daguza Mackle, the true purpose of the program might actually be to serve as a guidepost to test the pilot's heart as the program itself leads the pilot to the Box. Ironically (as agreed by both Banagher and Full Frontal) in the novel, the destination, where the Laplace Box is located, of the La+ program was Industrial 7, where everything started.

This system is inherited from the Sinanju Stein and functions by using the Psycho-Frame's sensitivity to the pilot's thought-waves to directly affect behavior of the mobile suit. It is also possible for the pilot to intercept the thought-waves of an enemy pilot. Additionally, the system directs the suit's movement when active, and does not completely depend on the pilot for commands. By default, the system will automatically attempt to destroy any Newtype enemies it detects, but requires the pilot to give it a conscience so it does not merely become a killing machine.

The Newtype Destroyer (or NT-D) System is an anti-Newtype system developed by the Earth Federation and used on the RX-0 Unicorn Gundam. The system works by using the Psycoframe built within its body to seek out Newtype brainwaves. Should one be found, the NT-D System activates and turns the Unicorn Gundam from its "Unicorn Mode" into its "Destroy mode", improving its stats overall and allowing it to take control of Newtype weaponry used by others and turn them against them. However, the system has a number of flaws to it. Among them being having a five minute time usage so it wouldn't kill its pilot and the fact that it doesn't discriminate against real Newtypes and Cyber-Newtypes. Its most ironic flaw is that, because of the massive stress to gives its pilots, a Newtype is the best pilot for the unit. Thankfully, those with strong wills can overpower the system and determine when it can activate.

Two massive boosters that are a combination of propellant tanks and thruster units are sourced from a Base Jabber Type 94, and attached to the rear of the Full Armor Unicorn via additional mount frame. The large boosters counter the suit's bulk and increase its deployment time. However, because of the sheer size of the entire full armor package once installed, the boosters must be fitted to the Unicorn outside the mobile suit hangar by other mobile suits.

The plan to fully weaponize the Unicorn Gundam was devised by Takuya Irei to fully utilize the massive mechanical potential of the Gundam. With the Nahel Argama's forces vastly outnumbered by their pursuers, Banagher hesitantly agreed to equipping the Unicorn with the full armor pack, which was composed of spare weapons from both the Nahel Argama and the Garencieres.

Its mobile suits outnumbered 12-to-1, the Nahel Argama debuted the Full Armor Unicorn, with Marida Cruz in the Kshatriya guarding it. Despite the massive numerical disadvantage, Banagher quickly turns the odds of the battle around, shooting down 20 enemy units and disabling several battleships by himself before the NT-D shut itself down.

Later, Banagher takes on Angelo Sauper in the Rozen Zulu. Despite the overwhelming firepower from the Full Armor Unicorn, the Rozen Zulu's Psyco-Jammers prevented Banagher from activating the NT-D. Londo Bell's Tri-Stars intervene and Watts is killed in the process. However, guided by Watts's voice, Banagher manages to destroy a Psyco-Jammer—enough for the Unicorn's Psyco-Frame to activate explosively. Banagher ejects the Full Armor pack and defeats Angelo, using the telekinetic attributes of the Psyco-Frame to control the Unicorn's three shields as funnels.

The Full Armor Unicorn Gundam has appears in the final act of Episode 6 and 7.

Like in the novel, the Unicorn Gundam is outfitted with massive arrangements of weapons by Takuya Irei. Banagher is able to use the Full Armor Unicorn Gundam to it's maximum potential, disabling multiple units while being able to fight evenly with Riddhe's Banshee despite the extra bulk. Banagher takes on Angelo Sauper in the Rozen Zulu who uses his Psyco-Jammers to prevent Banagher from using the NT-D. It isn't until Marida's death does Banagher, overcome with grief and anger, overwhelm the jammers and activates the NT-D, using his shields as funnels to destroy all the jammers. All the armaments except the three shields from the Full Armor Unicorn Gundam is destroyed by the Neo Zeong. 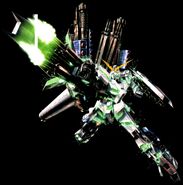 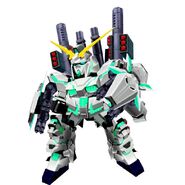 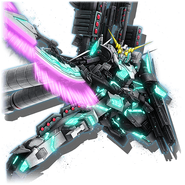 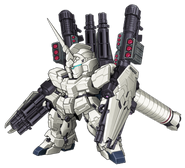 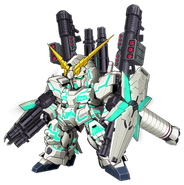 As seen in Gundam EXTREME VS. Maxi Boost ON 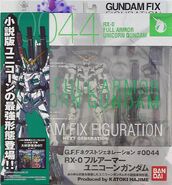 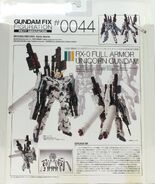